What I Learned from Star Trek Movies #6: The Undiscovered Country

By 1991, the original Star Trek cast had a good run. Most of the films were financial (if not critical) successes, and the picture was somewhat rushed to production to mark the 25th anniversary of the original series debut. While one potential script was planned as a prequel to the series with younger actors, that ideas was quickly shot down. Leonard Nimoy suggested a storyline about what would happen if the events of recent years from the ending of the cold war cold be set in the Star Trek universe. Since that was a well-worn (and successful) path for a lot of Star Trek stories, it made sense, even utilizing a Chernobyl-like incident to start off the movie. 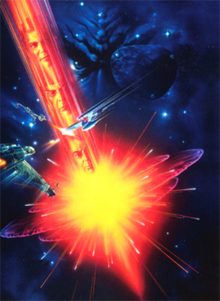 You have not experienced Shakespeare until you have read him in the original Klingon.

The analogies to the Cold War fly hot and heavy throughout the start of the movie – the Klingons treat Kirk as a reckless cowboy, and Kirk can’t forgive the Klingons for the death of his son. When Kirk is reluctant about being chosen as the emissary to chaperone a peace mission, Spock wisely reminds him that he is the one person who CAN help bring in peace, saying, “Only Nixon could go to China.”
Actor David Warner takes yet another turn in the Star Trek series as the Klingon ambassador, having starred in The Final Frontier (as a human character), and in Star Trek:The Next Generation as a Cardassian. While he’s memorable, the actor who steals the show is Christopher Plummer, who chews the scenery with gusto. Between him and Shatner, there was more ham on screen than at your local deli.
While many Star Trek films referred to classic literature, this movie was clearly a Bard-fest, with more lines from Shakespeare than the rest of the Star Trek franchise combined. The title refers to Hamlet, Act III, scene 1. Other plays include The Tempest, Romeo and Juliet, Henry IV, Part 2, Richard II, Henry V, Julius Caesar and The Merchant of Venice.  Director Nicholas Meyer was so fond of Christopher Plummer’s performance, he continually added more lines  – fortunately, he had a good writer to ‘borrow’ from.

While there were lots of strong special effects, dramatic tension and a gripping storyline, this movie got to the heart of what made Star Trek enjoyable – the characters. Each major character got plenty of screen time to  play off of their history, and their straight and punch lines were used to good effect.

When I watch this movie, it’s a bit sad, because Gene Roddenberry died prior to its release, and it was DeForest Kelley’s last film. Only Shatner, James Doohan and Walter Koenig would appear in the next film. I do, however, like its send-off. Kirk talks about the future as ‘The Undiscovered Country’ – while Hamlet talks about it in terms of death, the script and storyline are much more optimistic. As we say goodbye to the original cast and crew of the Enterprise, NCC-1701(A), Kirk gives his orders straight out of Peter Pan, making the story eternally youthful…..”Second star to the right – straight on ’till morning.”
What I learned from Star Trek VI: The Undiscovered Country is:
Only Nixon could go to China.