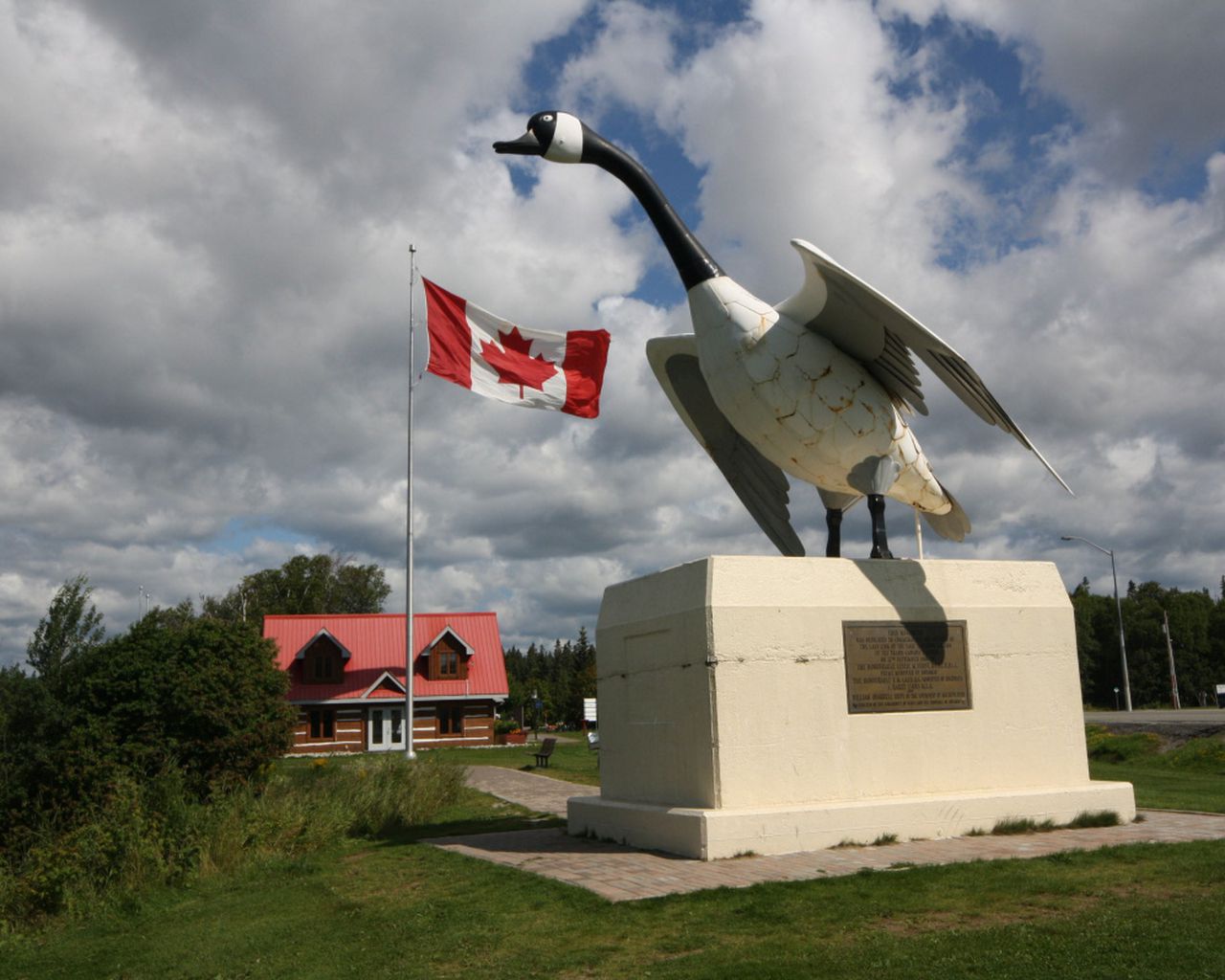 Growing up, we didn’t go on a lot of family vacations. Sure, we did the occasional day trip to a museum, amusement park, or baseball game, but other than a week spent down at ‘church camp, our summers tended to consist of riding bikes to the park, going to my brother’s baseball games, or weekend picnics down at the local reservoir.

When I was 9, though, we bought a pop-up tent camper. It was a small trailer that collapsed for pulling, but when you got to your destination, it would pop up and slide out 4 double-beds, with a small icebox cooler, dining table and tiny sink.

That summer, my parents planned a camping trip to Wawa, Ontario Canada. Even if today, it’s the name of a convenience store, Wawa means “wild goose” in Ojibwe. So, we were going to go on a wild goose chase in search of Canadian adventure.

In addition to my parents (2), and my immediate siblings (4), my 16-year old step sister and her best friend came along, making a total of 8 passengers on a 1300 mile round trip. Back in 1970, we didn’t have a plush SUV or even a station wagon to seat all the passengers – we had to use my dad’s work van.

The parents were fine, sitting up front in their driver and passenger seats. In the back, with no seats at all, were 6 passengers ranging in age from 7-16, sitting on wheel wells, milk crates or folding chairs. Whenever the van would start or stop, the unsecured cargo and passenger would shift forward and back in a cacophony of sliding chairs, shifting luggage and pinched fingers.

For the 600+ mile trip up, we’d stop every few hours, but each time, we were admonished to use the restroom facilities, since we weren’t stopping again until we needed to refuel. We tried to distract ourselves with snacks or games, but after a point, the back of the van was covered in a light missed of cheese dust, and the two oldest girls were not happy to be sharing a van with 4 bratty younger kids.

As we drove through Northern Michigan, we neared the Mackinac suspension bridge in Sault St. Marie. At the time, it was one of the longest bridges in the world, and I had a fear of heights. My siblings didn’t let this opportunity get by them, alternately shaking my lawn chair, and going “BOO!” when they saw me fearfully peeking out the window.

We crossed the bridge without incident, which was a relief, and eventually, made it to the town of Wawa, on a small lake just East of Lake Superior. We were struck by how colorful Canadian money was, and by the size of the giant goose statue in town. We read about how the original plaster and chicken wire goose lasted about 3 years, and was replaced by the stainless-steel goose, which was expected to last forever. (It was replaced in 2017). To this day, there is a picture out there of 9-year old me in front of a giant goose statue.

We went to our local campsite and set up. The two older girls wanted privacy, so they slept in the van, while the rest of us staked out our spots in the pop-up camper. We cooked hot dogs and hamburgers on the grill later, and ran about the campsite to see what trouble we could get into before the parents called us back ‘home’.

We stayed at a several different campsites in Ontario, which varied in their level of comfort and accommodation. Some had big playgrounds and recreation centers complete with pinball machines, others had a single forlorn tetherball setup with a broken swing set. While most had water and electricity for the camper, not all of them had clean restrooms and showers.

I’m sure that facilities have improved in the decades since, but we were introduced to several campsites with old-fashioned ‘pit toilets’, which were quite the experience, even in the mild temperatures of the Canadian summer. We developed our ability to hold our breath for a long as possible to avoid taking in the local aroma…but even then, most visits ended with a staggering sprint to get as far upwind as possible.

Another thing we were introduced to was the Canadian Black Fly. Apparently, we were visiting Canada during peak Black Fly season, which meant that we’d frequently stumble into swarms of buzzing, biting insects. Sometimes, they’d bite, and we’d discover the evidence by the dried blood on our necks. There didn’t seem to be any way to avoid them, and even insect repellent had little effect. We did get good, however, at spotting the denser fly clouds, and learning how to plot our path around the worst parts.

After several days on Lake Wawa, we broke camp and headed back towards the US. Instead of crossing the Mackinac bridge again, we headed west through the woods of Michigan’s Upper Peninsula. While we were driving, a giant raven swooped down in front of the van, and Dad swerved to avoid it, only to hear a giant “WHOOMP”. He drove on, and when we stopped, we found the poor bird still stuck to the front of a van like a giant feathered hood ornament, with a dragonfly stuck in its beak. We pulled it off the grille and gave it a respectful heave-ho into the woods.

As we drove through Wisconsin, my 11 year old sister was perusing the map, and saw something that caught her eye. She yelled “STOP! We’ve got to stop here!”, which happened to be Peshtigo, Wisconsin. I had never heard of it previously, but it turned out to be the site of the deadliest forest fire in recorded history, on the same night as the Great Chicago Fire, which got all the press.

Once the rest of the family had had enough of the forest fire re-telling, we loaded up the van and drove home to Kokomo, Indiana. After 9 days in a cramped van, we decided from then on, we’d be sticking closer to home.