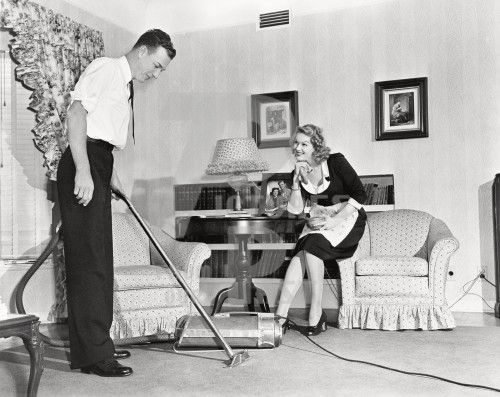 I’ve never been the neatest person, but I don’t mind cleaning. It’s nice to see a space improve as you get rid of clutter and wipe down counters. When you get done, the end result always gives a sense of satisfaction and pride. When I was a kid, though, ‘cleaning house’ took on a whole new meaning.

Since both Mom and Dad worked during the day, we all had chores, like washing dishes, taking out the trash and raking leaves. About once a month, though, my older sister Judy would inform the rest of us that she was about to clean the house – which was our signal that we needed to get out of the house, and quickly.

It wasn’t because we were trying to avoid housework…it was because when Judy started cleaning, you did NOT want to get in her way. She would clean like she was possessed, cleaning that house from top to bottom, and when she got done, it was like move-in day.

During that time, though, everybody else was ordered out…and you weren’t allowed back in for any reason. Judy would even go as far as locking the doors when the last kid was ushered out into the yard. At that age, we didn’t think much about it….we would just go and play in the neighborhood.

For the most part, there weren’t any conflicts. Judy cleaned house, we played, and those paths didn’t cross. One day, however, I forgot to hit the bathroom before I went outside to play. After an hour of chasing other kids around the neighborhood, I realized that I needed to go.

At first I ignored it, but when you try to stifle an urge to go to the bathroom, it usually only gets stronger and more urgent. None of the neighbors were home, so I couldn’t ask to use their facilities. I carefully ran back to the house and tried to open the front door. Locked. Ran around to the back. Also locked.

As my desperation increased, I tried both the front and back garage doors. They were locked, too. As my choices dwindled, I wondered if I was going to run into the woods and find out of that’s where bears went, too.

Suddenly, I had an idea. Underneath the house, we didn’t have a basement, but we had a crawl space where pipes and heating vents ran, and inside two closets, we had access panels that allowed someone to go into the space, usually to deal with water pump issues, since we had a well, instead of city water.

I figured, if those panels allowed access INTO the crawl space, if I could get in from the outside, I could crawl under the house, come up through the closet, use the bathroom and get back out, and Judy would never be the wiser.

I scanned the back of the house, and saw an access panel that wasn’t locked. I opened the panel, and scooted under the house, brushing away spiderwebs and keeping an eye out for any low-hanging pipes. I low-crawled across the space towards the panel closest to the kitchen, since it was the easiest way to get to one of the two bathrooms in the house.

I got underneath the closet panel, and could see some streams of light coming through, so I knew I was in the right place. I could hear Crosby, Stills, Nash and Young playing in one part of the house, and Sweep Judy Blue Eyes vacuuming in another. It was time to make my move.

I put two hands on the panel, and began to gently push up, not wanting to make any noise. As it started to give way, I pushed a little harder as I stood to my full 10-year old height, with the panel raised above my head, looking out onto the floor of the closet above.

Right at that moment, I looked up, and locked eyes….with Judy, who happened to be sweeping that very closet at the same moment I rose up out of the basement. I heard her scream, saw her raise up the broom, and then felt a giant WHOOMP! as the floor panel crashed into my head, sprawling me out into the dust of the crawl space below.

I must have laid there for a minute or so while the room stopped spinning and the stars went away. I clambered out of the crawl space, ran into a nearby cornfield to relieve myself, and went back to playing with the other kids in the neighborhood.

Later, at dinner, I tried to avoid eye contact with Judy, for fear I might get outed as the basement intruder. She never mentioned my name, but she told everybody at the table about the giant rat that she saw in the closet and hit with a broom. I didn’t say anything, but when dinner was over, I scurried away to avoid any more encounters with a broom.