July 9, 2004 – A normal day, or so it seemed. It was a sunny Friday. The kids were watching TV, the babysitter had the afternoon off, and had gone off to a concert. I was casually practicing riding my motorcycle in the elementary school parking lot. I didn’t have my license yet, but  was trying to get some time in before going off to my Motorcycle Safety Foundation (MSF) beginning rider course.
This wasn’t a  very big or powerful bike. It wasn’t a Harley, it was a Honda. Rebel 250. Born to be Mild. According to other riders, it was a good starter bike, that everyone assured me I’d outgrow in a few months. It seemed easy enough to handle, and not that difficult to ride around the neighborhood. I also made sure that I wore safety gear – full-face helmet, armored riding jacket, heavy jeans, boots and motorcycle gloves. I was taking just about every precaution I could. Born to be mild.

After a few passes up and down the parking lot, I began practicing hard stops. That entailed accelerating for several yards..then getting on the clutch and brake to get comfortable with stopping suddenly – because you never knew when that would happen in real life. On the third pass, I must have hit a patch of sand or something…..because I started to lose balance. When that happens, your first instinct is to grab onto the closest hand-hold. In my case, my hands were already on the handlebars…….but my hand was also on the throttle. When I gripped it hard, I over-revved the bike, launching me into a curb at the end of the parking lot. If I had hit just a few inches to the left, I would have bounced up and over the curb, likely landing in the grass after catapulting over the handlebars. Where I DID hit the curb, it was tall enough that the bike stopped suddenly, launching ME into the air. I came down right on the curb, and hit hard.
As soon as I landed, I knew it was bad. I was in intense pain, and had at least enough presence of mind to not immediately try to move. I tried wiggling my toes…..and while my left leg was good, I couldn’t feel anything in my right leg. A person walking by saw the accident, and called 911. His name was Sam, and I recognized him as the guy who ran the local service station inspection facility. He would take breaks and walk around the neighborhood. and fortunately that day, he was right on schedule. Sam’s full first name was Osama – he was from Pakistan, and was more than happy just to be known as Sam. He stayed with me until the paramedics arrived.
After I was transported to the hospital, they immobilized me for 2 full days prior to surgery. Right before putting me under, he had me sign a form, and said – “I don’t know if you’re going to walk again.” Surgery took six full hours, and I was in critical care for another nine days before transferring to a rehab facility, where I spent six weeks learning to stand and walk all over again. Wearing a full-torso TLSO (Thoracic-Lumbar-Sacral Orthosis), it took a couple nurses to help me roll over, get in a wheelchair, and even go to the bathroom. I was about as helpless as I could be without being completely bedridden. 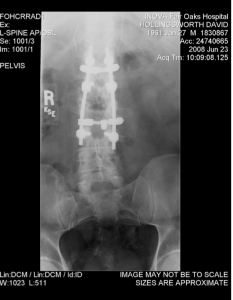 It took a good six weeks to walk more than 10 feet. I was off of work for six months, and it took a full year to be ‘released’ from treatment. I felt like it was another  two years before I felt ‘normal.’ Now, 10 years post the accident, it’s hard to remember what it was really like. I got the medical records from the ER, and they are quite a scary read. I went through a lot of different emotions during that time, and reading the report brought a lot of feelings to the surface.

Is there a Spinal Runner-Up?

Today, if I didn’t tell you I went through that, you probably wouldn’t know. I walk, run and ride normally, and am pretty active, competing (if you can call it that) in local athletic events. I love cycling, swimming and running, and did my first (and second!) triathlon that year. I’m even thinking about running a full marathon. I have to take my time and be careful about training….but it’s less because of the accident…..and more because I’m a lot older now.. Some days I’m a little sore from overdoing it…..but every day is an anniversary of the recovery, and I plan to be celebrating again on the 20th. Just not on a motorcycle.
EPILOGUE: If you’ve followed my stories, you know that I not only did my first triathlon that year, but I also ran up the Empire State Building, rode my bike to the top of Mt. Mitchell, and finished the Marine Corps Marathon. If you’re going to celebrate an anniversary, I think you should always do it right.
My first book, “Get Out the Door!” is coming soon. If you’d like a FREE preview, subscribe for updates at the upper right of the page, and I’ll put you at the top of the list!
Categories: Failure, Personal Development, Speaking, Success, Tenacity, Training, triathlonBy David HollingsworthJuly 9, 20142 Comments
Share this post
Share on FacebookShare on Facebook TweetShare on Twitter Share on LinkedInShare on LinkedIn