What I Learned from Star Trek Movies #5: The Final Frontier

As the Star Trek movie series episodes evolved, a few things became apparent – the cast was aging, and special effects alone couldn’t make the movies stand out. It was a hit and miss formula…which generated the axiom that if you wanted to see a good Star Trek movie….just watch the even numbered ones. That’s a little harsh, because #5, The Final Frontier, was the Star Trek movie debut for William Shatner as director. Leonard Nimoy had two good turns in the chair for The Search for Spock and The Voyage Home, so there was a lot of anticipation for Shatner to direct. 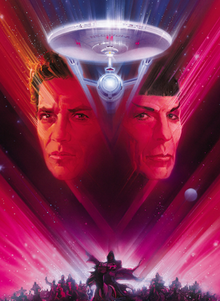 The movie started off promising enough, with Kirk scaling El Capitan…only to be interrupted, surprised….and then rescued by Spock in his anti-gravity boots. The story premise was set on an ambitious goal – What if we could actually find God? The plot introduces a charismatic Vulcan (is that an oxymoron) named Sybok, who happens to be Spock’s half-brother. Sybok engineers a hostage crisis that requires the Enterprise to take him and his followers to the place where they believe ‘God’ to be.
Shatner modeled Sybok’s character on televangelists of the time, who he believed offered flash and flair, with no real substance…but could get throngs of devoted followers. Sybok leads them to the God planet, where the crew beams down to investigate. They call the entity, who appears in all his spectacle….and asks that they bring the starship closer. Kirk asks the one question that has been bothering him all along: What does God need with a starship?
Sensing that this is just another alien smoke and mirror trick (and one that had been used in a number of Star Trek TV episodes previously), Kirk asked the one question that unveiled the entity for what it was – a charlatan, not a deity. Nevertheless, Kirk gets a biblical smiting front he alien and it takes the crew, the Enterprise, and ultimately, Sybok sacrificing himself to save the others to save the day. He dies, the crew is rescued, the Enterprise returns home….and Kirk goes back to camping in Yosemite.
As far as Star Trek movies go, this was my least favorite (in a tie with The Motion Picture). It seemed disjointed, the plot line had been done before, and it was clear the script had gone through several revisions, making the story and characters not as enjoyable as they had been in other movies. William Shatner, Gene Rodenberry and several others remarked that it nearly killed the series.
Thankfully, it didn’t….and I’ll wrap up the original cast movie series in the next entry with The Undiscovered Country.
What I learned from Star Trek V: The Final Frontier is….
What does God need with a starship?
Categories: collaboration, Dedication, Failure, Personal Development, Speaking, Star Trek, Success, Technology, Tenacity, TrainingBy David HollingsworthJuly 7, 2014Leave a comment
Share this post
Share on FacebookShare on Facebook TweetShare on Twitter Share on LinkedInShare on LinkedIn