What I Learned from Star Trek Movies #4: The Voyage Home

One of the most enjoyable Star Trek movies, Star Trek IV: The Voyage Home treads a familiar path for Star Trek fans – what happens when you take people from the future and place them in current times? Fish out of water stories have long been popular, and time travel stories go back at least as far as Mark Twain. 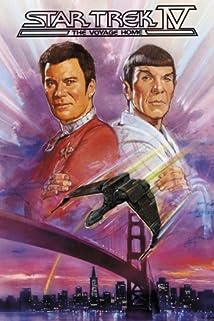 Both sides of the equation get to show their unfamiliarity and awkwardness, from Kirk and Spock getting booted off of a bus – “What did he mean….’exact change only?'” to Spock’s deadpan reaction to Kirk’s explanation of where he learned his new-found colorful language…”The complete works of Jacqueline Susann, the novels of Harold Robbins…”Ah…The Giants.”
The story goes back and forth between the race to (literally) save the whales, to finding a way to get back to their current time. Since most of the movie was filmed on location, it was fun to recognize San Francisco landmarks….and the (thinly disguised) Monterey Bay Aquarium. What I did NOT know was that Eddie Murphy was originally cast in the movie as a marine biologist…but didn’t like the role, so he went off to film ‘The Golden Child’ (much to his regret).
The bulk of the movie hinges on the dichotomy between having to fit in with the past, as well as dealing with the future. It differs from most Star Trek movies because there was no clear-cut villain, no space battle, and no lead character in danger….although Chekov had quite a close call at one point. The actors seemed to have a lot of fun with the script, and did a lot of what made the series fun…..playing off of each other to the audience’s delight.
While it may not have been the best Star Trek movie….it was certainly one of the most enjoyable.  At the end of the movie, Kirk is called on the carpet for disobeying Star Fleet orders (to rescue Spock), stealing a ship, and destroying the Enterprise. Since he saved the planet…..Star Fleet decides to go easy on him……demoting him to the one job he seems to be fit for…..Captain of a starship.

Captain, there be whales here!

Since the Enterprise was destroyed in Star Trek III: The Search for Spock, the crew wonders if they’ll be assigned to a freighter or some other ‘lesser’ ship…..when they see the new Enterprise NCC-1701-A…..
The Enterprise crew saves the day, the Earth is saved (both past and present), and off they ride into the sunset.
What I learned from Star Trek IV: The Voyage Home is….
It’s fun to re-visit your past.
Categories: collaboration, Customer Service, Dedication, Failure, Management, Personal Development, Speaking, Star Trek, Success, Technology, TenacityBy David HollingsworthJune 24, 2014Leave a comment
Share this post
Share on FacebookShare on Facebook TweetShare on Twitter Share on LinkedInShare on LinkedIn