What I Learned from Star Trek Movies #7: Generations

Star Trek: Generations was the movie that bridged the original series cast with The Next Generation cast – the plot device was that both Kirk and the TNG crew were sent to the same time period through something called The Nexus – which was a rift in time where there was NO sense of time….you just felt happy to be there. 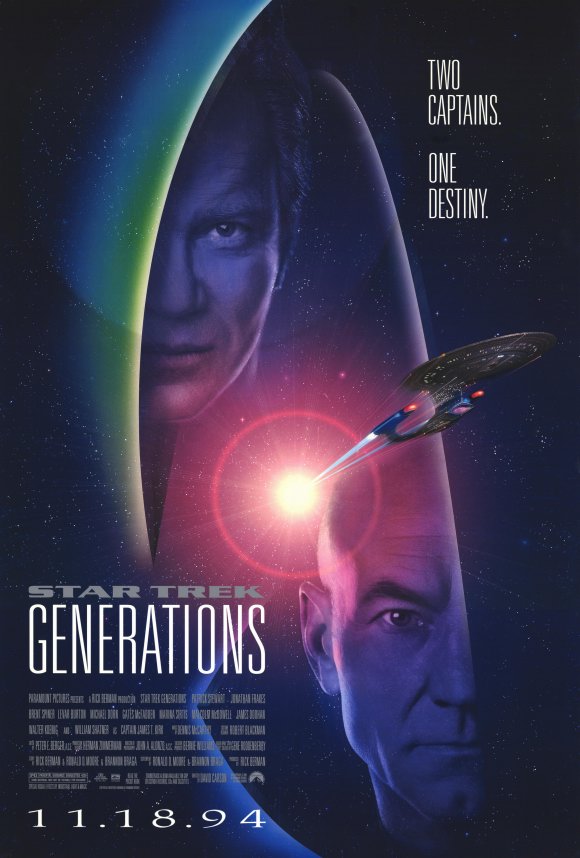 Since it’s the transition from the old series to the new cast, James Doohan and Walter Koenig make an appearance at the beginning of the film…..and too quickly, the film jumps into the ‘modern day’ TNG cast. The story revolves around a character, who, eventually is revealed to be the villain (played with gusto by Malcom McDowell, who seems to be channelling Sting). His character Soran, is a devious scientist, who will do anything to get back to the Nexus. When Picard is thrown into the Nexus, he finds that he can’t fight Soran alone – he needs help from the one person in history who can help….none other than James Tiberius Kirk.
Picard tries to convince Kirk of the importance of the mission, but Kirk is so happy where he is, he takes some convincing. When he finally realizes that it’s all a sham, he says to Picard….
“I take it the odds are against us and the situation is grim?”
Picard replies…”You could say that.”
Kirk follows: “You know if Spock were here, he’d say I was an irrational, illogical human being for going on a mission like that”
Then, after a pause, he says….”Sounds like fun!”
And, we’re off and running to save the universe once again.  They team up to battle Soran, who, while overmatched by TWO captains, does the one thing that we never thought we’d see in a Star Trek movie – he sends Kirk to an almost certain tragic end.
(SPOILER ALERT – IF YOU WERE BORN AFTER 1993….) When Kirk dies, while it’s in a heroic act to save Picard’s life, it’s hard not to chuckle at his final words…..or the obvious visual pun.

Picard finds a way to foil Soran’s attempt to leap into the Nexus….and get rid of Soran….and the scene quickly jumps to the TNG Enterprise D crew…..who, while they’d been wiped out in the original timeline, are now faced with a forced landing (e.g., a crash) into the planet. Even though they got short shrift in most of the script, Brent Spiner (as Data), gets one of the best lines of the movie as he realizes  that they’re really going to crash.
The crew suffers some casualties…but the Enterprise is destroyed (again). The movie ends on a somewhat positive note…with Picard noting Kirk’s passing….”Someone once told me that time was a predator that stalked us all our lives. But I rather believe than time is a companion who goes with us on the journey, and reminds us to cherish every moment because they’ll never come again. What we leave behind is not as important how we lived.”
While I was a bit sad to see the old cast go, it was time – In a lot of ways, the original series cast was playing parodies of their characters, and it was time to move the story line forward with a new crew. The main point that the movie drove home for me, was that while the Nexus was (according to Whoopi Goldberg’s Guinan character), the happiest place in the universe (kind of like an inter-galactic Disney World), it was just a fantasy. While it may be happy, and without care….we need an edge, a challenge, a finite time to live, so that we make the best of our lives. I don’t know who wrote the line, but early in the film, Malcom McDowell feels compelled to find Captain Picard to say something so important, he’d risk entire worlds to say it. Over the years, I’ve found that it’s more and more true.
What I learned from watching Star Trek: Generations is…
Time is the fire in which we burn.
Categories: Dedication, Failure, Personal Development, Speaking, Star Trek, Success, Technology, TenacityBy David HollingsworthJuly 15, 2014Leave a comment
Share this post
Share on FacebookShare on Facebook TweetShare on Twitter Share on LinkedInShare on LinkedIn