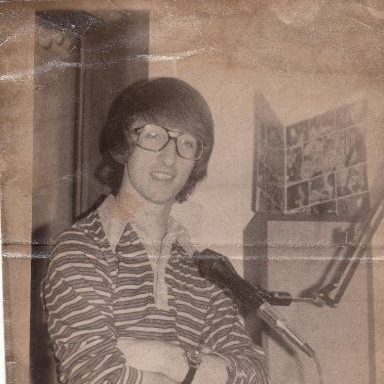 When I was in high school, I really wanted to be in radio. I listened to the DJs on WLS in Chicago, the local personalities on WIOU AM and WWKI FM in Kokomo, and the ‘big city’ DJs on-air for WNAP FM and WIBC AM in Indianapolis. I even waited for the daily spots from Paul Harvey, which, despite their hokiness, made me want to hold listeners in anticipation like he did, when he said, “This is Paul Harvey……………….Good day.”

I would hang out at remote radio broadcasts when they were at the local shopping center and county fair, wondering what it would take to get me behind that magic microphone, entertaining invisible audiences across the airwaves while I spun records, read the weather or news highlights or handed off to the network news at the top of the hour. At night, I would fall asleep listening to the comforting patter of late-night AOR (Album-Oriented Rock) DJs as they dug into deep tracks from Steely Dan and Yes.

At some point, I stumbled into Junior Achievement. I wasn’t part of Scouting, so my parents were glad I was doing something out of the house during the winter. The first year, our adviser came up with the idea of screen-printing license plates with local high school mascots or Indiana colleges. Because IU had recently won the NCAA championship, those were a hot seller, with Purdue and Notre Dame not far behind. My future alma mater (Ball State) was a distant fourth, followed by the local high schools. I learned a lot, and we actually made a profit.

The following year, I was looking for something different, when I found that JA had a radio station company. It was able to book 2 hours on a Sunday morning that wasn’t selling, so the station donated the air time to JA. I was excited to leverage this opportunity to make my big break in radio. In reality, it wasn’t as glamorous as I had dreamed, but hey, it was real radio on a real radio station.

After a few months of writing, producing and doing on-air work for the JA show, It came to an end. I talked to some of the DJ’s, and they said they were looking for someone to fill in from time to time, so I jumped at the chance. The hitch was, that in order to work at the station, you had to have an FCC 3rd class operator license. The reasoning was that if the engineer couldn’t make it into work, or was stuck in the bathroom, you needed to know how to turn the power on or off (which was the limit for what a 3rd class holder could do), so we didn’t get in trouble with the FCC.

I said that I’d love the opportunity, and bought a study guide for the exam. To pass, I had to study Elements 1, 2 and 9. There were parts about Morse Code, how to calculate power, how AM antenna arrays differed from FM, and all sorts of other arcane subjects. It seemed a little much, especially considering that all I was allowed to do was turn the transmitter on or off, and if that didn’t work, to go find a real engineer.

In high school, I was a pretty quick study on most subjects, so I approached the FCC material like I did in school, which is to say….casually. I skimmed through material, took the end of chapter tests and felt like I was ready to take the test. I told the station I was ready, and read up on how to take the exam.

Living in North-Central Indiana, the closest place to take the exam was at the Chicago district office, which was a 150-mile, 3 hour drive away. I had my license, but there was no way I was going to be allowed to drive on my own to downtown Chicago. My dad said that he’d take a day off of work to take me to and from the exam.

While I did a fair amount of cramming for the exam, I felt confident that I would do well, since I was a straight-A student in high school, and besides, how tough could it be? I got up at 5AM for the trip, showered, and my Dad and I got into his work van for the trip to the big city.

We drove up I-65 through the barren winter cornfields of northern Indiana. My dad was never one for small talk, so we listened to the radio while I tried to review the exam material. That worked for a while, but after a few hours, I got tired, and just looked out the window.

The skyline of the Windy City gradually came into view. I could see the outline of the John Hancock building and the Sears Tower in the distance as everything became a bit more real. I had ridden around Chicago in the back of Dad’s van years before, but this was my first time as a front-seat passenger to any place bigger than Indianapolis.

We navigated the Dan Ryan Expressway, and headed towards Lakeshore drive. We turned on to Michigan Avenue and looked for parking near the Federal building. Back then, we didn’t have GPS, Waze or Google Maps. I fumbled through a folding paper map, and tried to direct Dad to a nearby parking space.

We parked the car, loaded up the meter with quarters and headed towards the test location. We walked into the building, and I found the FCC exam office on the directory, and I went up to the room, while Dad decided to hang out in the coffee shop and read the newspaper.

I found the exam room, cleared my throat, walked up to the window, and told the glum employee behind the glass that I was there to take my 3rd Class Operator’s Exam. “I bet you are,” they said. Without looking up, they handed me a clipboard with forms to fill out. I found a chair at the back of the room and pored over the registration form, trying not to make a mistake.

I turned in the form, and the clerk said, “Take a seat over there and we’ll call you when we’re ready.” I went back to my chair, and tried to get some last-minute wisdom….when I heard, “HOLLINGSWORTH!” I looked up, and a stone-faced man with a crew-cut, short sleeves, half-rim glasses and a pocket protector was pointing to a set of desks in the next room.

I sprung from my chair and headed towards the exam room, trying not to look too eager or too nervous. The examiner pointed to a row of desks, and handed me an exam book, a scan sheet and two #2 pencils. He barked, “Don’t start until I say so.” There was no way I would try.

I sat down, laid everything out in front of me, and looked up at the examiner. He looked at the clock, and said, “OK, start.”. I opened the booklet and started going through questions. They seemed easy at first, but as I went on, I struggled on remembering Morse Code, how to calculate transmitter power and what to do when the engineer wasn’t around.

Over time, a lot of the answers came back to me, so I went through the test a couple times, closed the book, and confidently strode up to the the counter to hand in my exam. Mr. Crewcut didn’t even look up, but said, “Wait out there,” and pointed back out to the main room.

I had finished in under an hour, so I thought I was in the clear. About 15 minutes later, I hear “HOLLINGSWORTH!” yet again. I jump up and sprint to the counter to get the verdict.

The examiner looked down a the exam sheet, and said, “You did OK on section 1 and 2….” I held my breath. He then said, “but you missed section 3 by one question. You can come back in 30 days and try again.”

The air seemed to go out of the room. How could I have flunked the test? I staggered down to the coffee shop, and Dad looked up. “How did it go?” I looked at the floor, and said, ” I missed by one question.” Dad didn’t say much after that He put on his coat, threw the newspaper in the trash, and we headed for the van.

It was a long, quiet 3 hour drive back to Kokomo.

I knew Dad was disappointed, and so was I. I got cocky on the exam, and thought I could just breeze through it, but like a lot of things, this was real work, and I should have paid more attention. In college, I worked a little bit in radio in the dorm and for the Public Radio station, but eventually moved on to other things. I knew one thing, though. If I had to go to Chicago again, I was taking the bus.