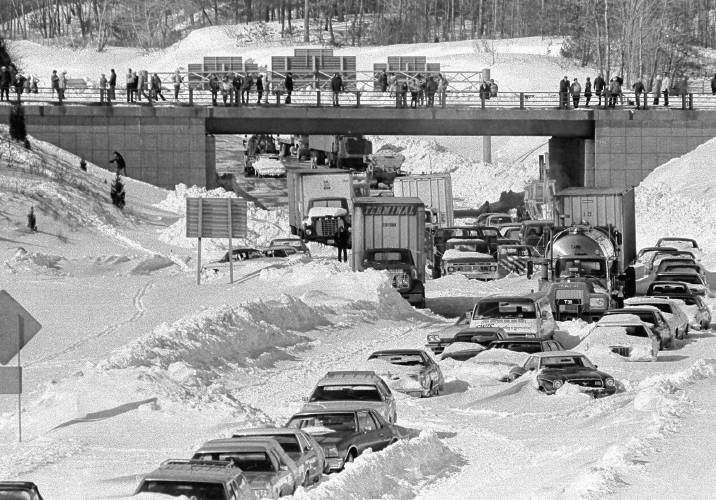 My late January birthday always seemed to carry with it a blast of winter weather. Even if the winter had been mild up to that point, January 27th brought snow, sleet, ice and frequently Arctic weather and sub-zero wind-chill temperatures.

The previous week seemed mild enough. We had snow on the ground, but temperatures hung in the mid-30s, and the daytime sun made going outside enjoyable. School buses arrived on time, and nobody mobbed the grocery stores.

The morning of January 26th, though, temps started to drop, and snow started falling. It got heavier as the day went on, and by late afternoon, we had nearly 10″ of snow on the ground. We were used to heavy snow in Northern Indiana, but this seemed different.

School dismissed early, so I got in my 1977 Ford Maverick and headed towards home. I had to turn down a country road to drop off a friend. By this point, visibility was down, and I could see that snowplows had already been dispatched. As my headlights made out a plow in the middle of the road, I could see the driver waving at me to turn back, because the road was nearly impassable. My friend said they could hike the rest of the way.

I turned and headed for home, and once I turned down Malfalfa road, I felt like I could make it without incident. I pulled into the driveway, parked the car, and ran inside. Mom had already started dinner early, so we settled in for a long night and turned on the television to follow the storm’s progress.

I stayed up late that night jumping between WIOU-AM and WWKI-FM to see if we would be in school the next day. It didn’t take long to hear that school was canceled for the next day. I figured I’d be celebrating my 17th birthday by breaking out the sleds, and drifted off to sleep.

The next morning, I got out of bed and looked out the window, but couldn’t make out anything due to the frost. I went into the living room to look out the picture window, and saw that the front yard had been turned into an unrecognizable moonscape.

The driveway and front porch were buried in over 20″ of white powder. My car was almost completely buried in a snowdrift that started in the middle of the yard and curved over the roof of the car, leaving a lone headlight visible. On the other side of the driveway, our family car and camper trailer were swallowed by a 12′ tall wall of snow that started at the roof of the house, and sloped down until the rear bumper of the Buick.

My brother Jim spoke up, and in an understatement, said, “I guess we’re not going to school the rest of the week.” Dad told us to grab a shovel, so we put on our winter clothes, boots and coats, and headed outside to try and dig out.

Jim and I started on the Buick, while Dad ran the Sears garden tractor up and down the driveway with a plow attachment. While we were bundled up to our eyes in winter gear, Dad just had on his canvas coat, with his glasses frosted over and a dangling Salem cigarette glowing in the blowing snow.

After 3-4 hours of digging, we finally uncovered the Buick Regal and the Maverick, but it was clear we weren’t driving anywhere. We broke out the sleds and watched as a pack of snowmobiles buzzed down the street. Fortunately, we had plenty of food in the house, so nobody had to go to the store, because we knew we’d end up hoofing it.

By the next weekend, the roads were plowed enough to get around, but I had to drive carefully on the packed, icy streets. I took my girlfriend to McDonalds, and on the way back to her house, we got stuck in the driveway and had to be rescued by one of the roving snowmobile gangs.

I think we missed about 10 days of school, which was a much bigger deal back then, because we didn’t have any way to catch up. Just a few weeks later, my friends and I braved the Hoosier winter to go to the Indiana state band and choir competitions in Indianapolis. While the snow wasn’t as bad as the January blizzard, we had to fight to say on the road, and saw several trucks that had gone off the highway, into the ditch.

Since then, I’ve been through a number of snow storms, but never one as memorable as the Blizzard of ’78. These days, I’d just as soon stay inside, and wait for things to warm up.