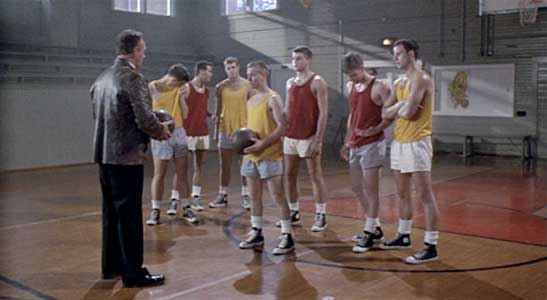 A key part of growing up in Indiana is a love for all things basketball. If you’ve seen the movie “Hoosiers”, it’s hard not to root for the underdog team from Hickory High, but the thing is, it’s loosely based on a true story, where the Milan Indians (a school of under 200) outlasted over 700 teams in the state championship, to defeat powerhouse Muncie Central with a buzzer-beating last shot. It may have been a Hollywood script, but happened exactly like that. Over 65 years later, people still remember that game.

So, if you’re from Indiana, basketball is a part of your life. Even if you’re not very good at it….and I wasn’t. While my brother Jim was a gifted athlete across several sports, I was a makeshift collection of adolescent parts, some of which worked in coordination, but mostly didn’t.

Even so, we shot hoops every chance we could get. Whether it was 2-on-2 down the street at Kirk and Brett’s house, or playing H-O-R-S-E in our driveway, if it was daylight, we were playing.

The first organized team I played on was something called “Biddy League”. It was an attempt to get as many kids playing as possible, and hopefully having fun, too. There were lots of rules. No keeping score, no timeouts, no fouls….and generally, no fun. It was good that they didn’t keep score, because with every player mandated an equal amount of time on the court, there were more bricks and missed backboards than you could count. It was mainly a way to keep us out of trouble on a Saturday morning.

While I played in Biddy League, I quickly learned that being a member wasn’t quite the badge of respect I wanted….after wearing my team shirt to a pickup game, my nickname became “Biddy League.” I quickly tried to shake off that image by dribbling into a corner, and when the defensive player got too close, I would slam the ball off their thigh as hard as I could, calling “Out of bounds!” as they fell to the ground holding their leg, and we got the ball at the top of the key.

After a couple seasons of Biddy League, our church decided to field a team. Church leagues were an interesting mix of neighborhood and cultural alliances. We would try and recruit ringers to come to church once a month, and both parents and players tried to modify their language so they wouldn’t get ejected from the game for profanity.

Since high schools were usually booked for practice or games, we practiced and played our games at middle school gyms, which made for a more spartan experience. The bleachers were no more than a couple rows and there usually weren’t any locker rooms, so we’d either dress at home, or try to change into uniforms inside a cramped middle-school restroom.

The court took up pretty much all of the floor, which added some excitement to the games. If a ball went out of bounds, the spectators became part of the game, with players landing in their laps as they tried to keep the ball in play. Once, my brother Jim went after a ball, only to hit the emergency exit door, opening it and landing face-first in the snow.

Church league wasn’t as egalitarian as Biddy League – we kept score, tracked fouls, and actually tried to win (if we could). Our team had some good players, but they also had me. I’d occasionally land a shot or two, but most of the time, I sat the bench while the better players kept the games close.

While we did the best we could, our team was up against the much larger churches in town, who, simply because of size, had a better selection of players to choose from. They also had much better uniforms. St. Patricks and Main Street Methodist had real uniforms with matching tank tops and shorts like the big teams….while we made do with screen-printed T-shirts and whatever shorts we had, whether they matched or not. At least a couple players wore black socks.

I played for about 5 years, until after I turned 16. That year, we had an incredible team. Through some coincidence, all the players on our team were the same age, so we had a height / size / age advantage over most of the other teams in the league. That year, we won most of our games, and even made the league tournament that year. In the final, we fought hard against Main Street, but their skill overcame our size advantage, and we got knocked out of the tournament.

I’m still a huge basketball fan. Every year, I watch the NCAA college tournament, and root for the underdogs, because I know what it feels like to be the little guy. You might lose most of the time, but every so often, you hit a magical 3-pointer at the buzzer and feel like you’re on top of the world. That feeling sticks with you forever.