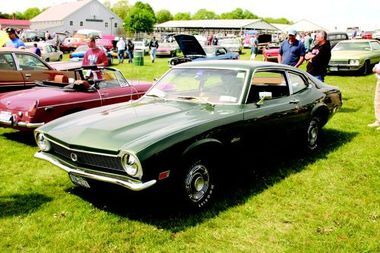 The first car I drove was a 1971 Ford Maverick. 2 door, dark green, and about as base of a model as you could get. No pinstripes, mag wheels or body trim, just a dark green, non-descript basic mode of transportation. The interior wasn’t any fancier. Black vinyl bench seats, AM radio and not even a glove compartment, just a hard plastic shelf below the thinly padded dash. The brochure pics looked like this:

By the time I was able to drive it in 1976 (just 5 years old), the northern Indiana winters had rusted it so badly, it looked closer to this:

Still, it was a car, and I got to drive it, which counted for something, and gave me a taste of independence. Some of its ‘features’ included trunk rust so bad, the cat would climb up into the trunk….without having to have it opened first. It handled adequately, if you were driving in a straight line on a flat, recently paved road. Anything other than smooth introduced an ongoing bounce that felt like the Tacoma Narrows Bridge right before the collapse. Zero-to 60 was glacial, however, I did get it up to triple digits once. Once. I don’t think my nerves could handle more than that.

One time, my friends and I went to the North Drive-In, which was (predictably) North of my home town of Kokomo, Indiana. Drive-in theaters were still a thing back then, but on the weekends, this one hosted a flea market. Since it provided a reason for getting out of the house, we took the Maverick to the drive-in. Since they charged per person, and we were cheap bastards, we tried the time-honored trick of hiding two people in the trunk.

As we drove up to the ticket booth, I kept telling the guys in the trunk to keep quiet, but it was difficult since they were both stuffed in there tighter than last year’s jeans on January 1st. One of them yelled out about the other one farting, and I had to keep banging on the seat to try and keep them from being discovered. I’m surprised they didn’t get asphyxiated by the exhaust fumes leaking into the trunk.

Fortunately, the attendant wasn’t any wiser (or didn’t care), so we got through just paying for two people. We quickly drove to the back of the lot to release the stowaways before they choked to death. We angled the car to avoid detection, and unlocked the trunk. The lid popped up, and the two guys in popped out like a canister of Pillsbury crescent rolls. Just as they cleared the lid, a blinding set of headlights lit them up, but then turned away as the drive found their own space. We breathed a sigh of relief (especially the guys from the trunk), and sent the youngest off to the concession stand to get popcorn.

As the car aged (and not gracefully), other issues started to surface, as the paint surface continued to deteriorate. Ride quality was never great, but over time, the car developed a squeak in its suspension that we couldn’t get rid of. It also ruined any ability to drive home late at night undetected. You could hear the car coming about half a mile away as it bounced up and down, squeaking like a bed at a cheap motel rendezvous.

The final straw for the car was likely the horn. At some point, there was a faulty wire in the horn circuit, that would randomly lock the horn into the “ON” position. In the days before airbags, the horn on a Maverick, was a circular, barely cushioned pad in the center of the wheel. If the horn came on unexpectedly, a sharp blow to the center of the steering wheel usually remedied the situation. Over time, though, the horn would come on at strange times, like in the middle of the night when the temperature dropped below 20 degrees. I’d wake up around 2AM, and hear the horn in the distance, droning loudly. I’d throw on some shoes and a coat, go out and hit the horn a couple times to stop it. After a couple weeks, the neighbor had had enough. I heard the horn go on one night, and then stop, so I went back to sleep.

When I went back outside in the morning, the neighbor had fixed the horn, all right. By ripping the center of the steering wheel off the column, leaving it hanging by two dangling wires. I ended up disconnecting them and putting the pad back into place. At least I didn’t have to get up @ 2AM anymore.