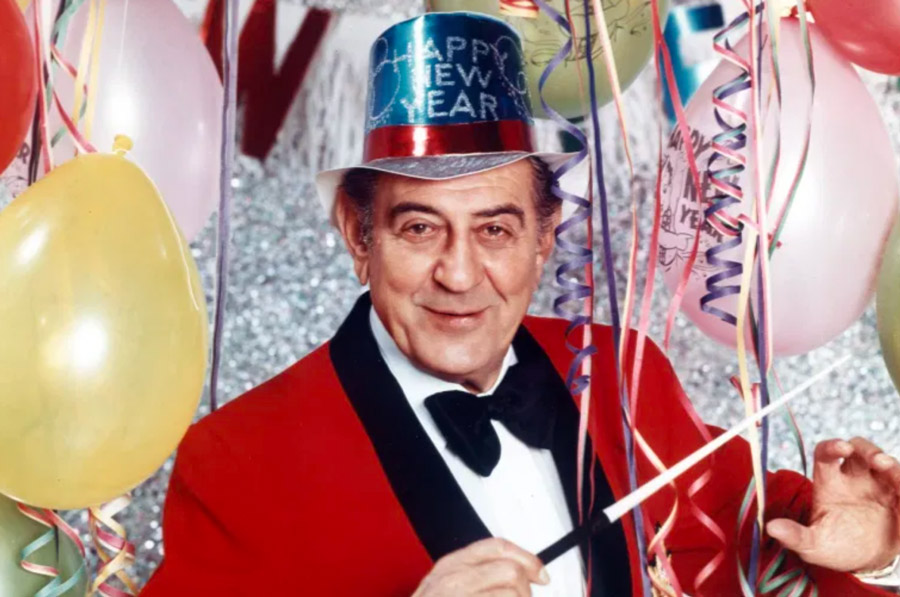 I’ve never been much of a night owl, but as a kid, staying up past my normal bedtime was a rare event, and I took advantage of it when I could. That was especially true at the end of the year. Christmas had come and gone, and hanging around the house instead of being in school was kind of boring. I was ready for almost any kind of distraction.

‘Distraction’ was a relative term. The New Years’ Eve entertainment options was really whether or not to turn on the television and watch Guy Lombardo’s big band bring in the new year. Back in those days, there were only 3 broadcast TV options, 4 if your TV antenna was lucky enough to face the right direction. After 11PM, most of those channels played the National Anthem and went dark….or switched to a black and white test pattern.

So, Guy Lombardo became an annual tradition in our house. The parents seemed transfixed by the soothing big band sounds coming from the ballroom at the Waldorf-Astoria. To me, it just seemed like an extended Lawrence Welk episode, with fewer accordion solos. The location sounded like an exotic foreign country, instead of two merged hotels in midtown Manhattan.

The parents would listen to the music, while my siblings and I would argue over board games like Monopoly or Risk. Because it was a special night, food options became a bit more exotic, like the Great Midwestern Cheese Ball or oil-popped popcorn, served in a brown grocery bag (with the dark stains that indicated freshness).

A few years later, Dick Clark debuted his “New Year’s Rockin’ Eve”, with contemporary musicians and celebrities, but back then, we had to settle for Guy Lombardo and the hypnotic strains of his Royal Canadian orchestra. By the time midnight rolled around, anyone who hadn’t already passed out would be lulled to sleep by the big band drone of Auld Lang Syne.

With the late bedtime, it was a dice roll to see who would actually wake up first. I’d try to hang on to dreamtime and my pillow as long as I could, but eventually, I’d hear Mom repeatedly calling my middle name outside the door, telling me to get up. I never knew how “Craig” could have two syllables, but Mom made it sound like a giant parrot on repeat, guaranteeing I wouldn’t stay in bed long.

I’d stagger out my bedroom door in my Sears Toughskins™ pajamas. (Those also guaranteed I wouldn’t stay in bed too long), towards the kitchen, where Mom was preparing a New Years’ Day meal. The aroma* (* ‘aroma’ is generous) came wafting down the hallway. While Thanksgiving smelled of turkey, and Christmas of cookies, because of our German heritage, the traditional New Years’ Day meal consisted of ham….and sauerkraut. Wafting? More like hurtling down the hallway like a tidal wave of fermented cabbage stank.

I’ve always hated sauerkraut, and unless it’s buried under two slices of rye bred, thousand island dressing and a pile of pastrami as part of a Reuben sandwich, the stuff still makes me gag. Still, it was part of our ‘heritage’, so Mom was proud of carrying on that culinary tradition.

Mom was also proud of being able to put together a meal like that, since she had only recently started full-time work in a factory job, and could afford to splurge on a meal now and then. She called the four kids to the kitchen table, which was laid out with ham, potatoes, green beans….and sauerkraut.

She said, “Take as much as you want!” and started passing around plates for the kids to serve themselves. I grabbed some ham in the first go-round, potatoes in the second, and some green beans for good measure. When it came time to the sauerkraut, I pulled one lone strand from the pile, and quickly passed the plate to my sister.

Mom looked across the table. “What’s wrong? Don’t you like sauerkraut?”

My siblings laughed loudly, and Mom just rolled her eyes. At five years old, I was still working on my comic timing, but I knew a punch line when I saw one.