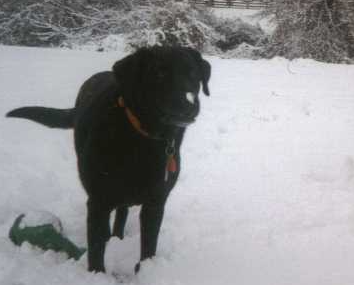 1991. My fiancee and I had moved down from Connecticut to Northern Virginia (to find jobs, because the CT job market sucked). She was working for a pharmaceutical company, and I was working for MCI (when it was still just a long-distance company). MCI was a meat grinder. Lots of meetings, politics, and tense ‘discussions’, but not a lot of actual work got done. God help you if you missed an email, though.

I was doing an hour+ commute each way to Pentagon City, and would come home, just beat. By Fall, we had married and bought a big house that took both incomes to afford, and started trying to put down some roots. We didn’t want kids just yet, but what the Mrs wanted more than anything, was a dog.

I was so busy with work that I didn’t have time to breathe, let alone take on another responsibility, so I tried to placate her by saying we’d get one at the start of the new year. While that seemed to be OK at the time, my wife would cruise the local animal shelters, looking for lonely faces.

At dinner, she’d spread out a bunch of pics on the table, asking which dog I liked the best. It looked like a lineup of criminal K9 suspects. I’d pick one or two, and remind her that I was too busy to take on a dog just now because work was beating me up one side and down the other. She agreed and kept doing her shelter rounds.

One day, she put just one pic of a handsome black Lab on the table, and said, “What do you think?” I said, “I guess it’s OK…” She said, “Her name is Scout! You know, like the girl in ‘To Kill a Mockingbird?'”

“You named a shelter dog?” She swiped the pic off the table, and pinned it to the bulletin board. I told her, once we got through Christmas, if the dog was still available, we could go check her out.

December rolled around, and work was tougher than ever. I got a new boss who was every bit the archetype for Trump on “The Apprentice”. Loud, bossy, and threatening to fire everyone. I doubled down on my effort and tried to stay off his radar.

The week before Christmas, everyone was looking forward to the annual party, held at a swanky Arlington hotel. I thought it would be a nice relief from the treadmill I’d been running on for the last six months, and came to work on Friday thinking it would be a light day since it was the last day before the holiday break.

At about 10 AM, my boss called me to his office. I had heard there might be bonuses this year, which would come in really handy since the mortgage was eating up pretty much all our disposable income. I walked into the office, and he motioned for me to sit down. I looked over, and an HR rep was sitting next to him.

As soon as I saw the HR rep, I knew it wasn’t going to be good. The boss had been bringing in his cronies from Andersen consulting, and having me train them, so it didn’t take long to guess what he was going to say….

“We’re going to have to let you go.” On a Friday. The day of the Christmas party. I gathered up my stuff, shuffled off to the Metro, and got on the train for the ride home.

When I walked in to the house, My wife called from the kitchen, “You’re home early….want to go see Scout?” When I didn’t reply, she came into the room and said, “What’s up?” I looked down at the floor. “I got fired.” Her expression turned dour, and she said, “Don’t worry about it, we’ll find a way to get by.”

She didn’t mention dogs at all that week, and because money was so tight, we agreed that we’d spend no more than $20 on each other for Christmas, and we could dip into savings to deal with the mortgage while I was looking for a job. Holding on to the house was far more of a priority than getting a dog.

Christmas morning came, and there we sat, in our big empty house with our Ikea furniture and milk-carton bookshelves, with holiday music playing on my 1980’s college boom box (which still worked, despite one of the two cassette players’ door taped shut.) My wife put on some hot chocolate, and gave me a little box. “Open it,” she said.

I unwrapped the box, and it was a little book. “How the Grinch Stole Christmas”, by Dr. Seuss. I chuckled, “Maybe you should have given this to my boss.” She said, “You have to keep laughing. It’s the only way to get through stuff like this.” I reached under the Charlie Brown Christmas tree and handed her a slightly larger (but still small) box.

She shook it, and said, “What’s in it?” I said, “Open it, and find out.” She carefully unwrapped the tape and wrapping paper to find a plain cardboard box. “Keep going”, I  said. She opened up the box, and inside was…

A leash, a collar…and a picture of Scout.

She said, “I thought we said -” I held up a hand to interrupt her. “Yesterday, I got a call from a recruiter that said they had a new job that wanted me to start on January 2nd. We’re going to be fine.” She finished her sentence – “That we weren’t going to spend more than $20.”

I replied – “The leash and collar were $19.95, and we don’t have to pay for Scout until AFTER we pick her up, so technically, I was under the limit. And besides, they threw in a 40-lb bag of dog food, so if we get TOO desperate….”

She dropped the box, threw her arms around me, and squeezed me so hard, I thought I was going to pass out. With tears streaming down her face, she said, “How did you know what I wanted?” I said, “You’ve been looking at that picture every day for two weeks. It wasn’t hard to figure out.

The next day, we went to the Arlington County Humane Society. As soon as we walked in the back, Scout recognized my wife right away and started jumping up and down. When we walked Scout to the car, she jumped right into the back, like she was already a member of the family. Which she was, for the next 12 years.

Since then, there have been bigger gifts, fancier gifts, and more expensive gifts….but never one as precious as the one that came wrapped in its own fur coat.
My first book, “Get Out the Door!” is coming soon. If you’d like a FREE preview, subscribe for updates at the upper right of the page, and I’ll put you at the top of the list!