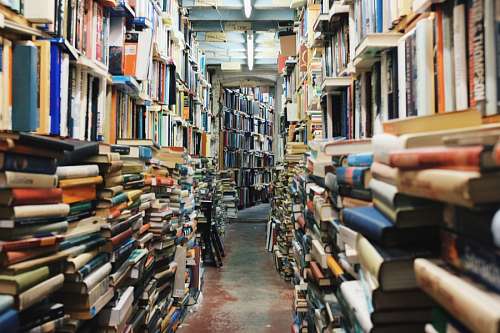 One source of apparently endless reading material was the encyclopedia. Ever since the Internet arrived, there’s been less and less need to look inside an actual book for information, but back when I was a kid, there was no Google or Wikipedia to help you settle an argument or win a debate. You had to go find the information on the printed page.

Depending on whose house I was in, it seemed that everybody had an encyclopedia set of one kind or another. From what I’ve been able to find out, there used to be door-to-door encyclopedia salesmen that would attempt to persuade a parent that a set of encyclopedias was just what Junior needed to succeed in life (whether Junior could even read was another story).

My grandmother had a dusty set of green Funk & Wagnalls ‘New’ Encyclopedia (p. 1955). By the time I found it, it had been out for 11 years, and lacked any information on things like the space race, Cuban Missile Crisis or Kennedy assassination (or even Kennedy). One of the neighbors had a set of Childcraft encyclopedias, which, even at age 7, I felt had been dumbed down too much to be useful.

When we moved out to our house in the suburbs of Kokomo, Indiana (better described as next to the cornfields of Howard County), my stepdad had not one, but two sets of encyclopedias. One was a massive brown Encyclopedia Brittanica set, and the other was an almost-complete set of white and blue World Book Encyclopedias.

Back then, some encyclopedias were sold at the grocery store. You would get a volume at a reduced price for buying a certain amount of groceries. I think that’s how Grandma got her set of green Funk & Wagnalls, and how I suspect we got the white and blue World Book….which, for some reason, was missing the volume for the letter “F”. If I wanted to look up anything on France, feldspar or film, I had to haul out the giant Brittanica volume for EXTRACTI to GAMB. (the Brits spread out their knowledge across equal-size volumes).

Today, since we have Google for brains, there’s not much need for an encyclopedia. We can look up a Wiki article in a few seconds, or get a definitive answer just by asking Siri’s disembodied voice “Who’s buried in Grant’s Tomb?” (Answer: It’s Mr. and Mrs. Grant). Trivia nights have to have no-phone rules, and even the test for “Jeopardy!” had gone on-line.

That being said, I still miss the ritual of hauling out a big book off the shelf and hunting for a specific piece of information. Sometimes, I’d find the answer, and sometimes, I’d disappear into a rabbit-hole of lazily flipping through the encyclopedia, finding out facts just by serendipity. I miss the feel, the touch and the smell of those old books. I’m happy to have Google, but it’s just not the same.