Shootout at the OK Chorale 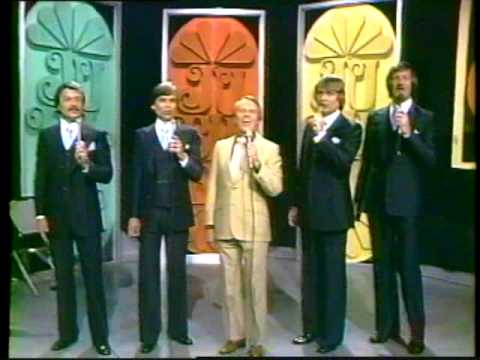 I grew up in a musical family. Mom and my sisters all played the piano. My brother played the guitar. The one thing that we all did, especially every Sunday at church, was sing. Most times it was in the congregation, but once every month or so, the four kids would be trotted out to sing in front of the church.

The earliest memory I have of singing in front of the congregation is when I was bout 4 or 5 years old. My sisters wore pastel dresses, and my brother Jim and I were decked out in tiny versions of tan suits….although with shorts and knee socks, along with clip-on ties. We had matching crew-cuts to round out our snappy ’60s fashion sense.

We were all decent singers, even as kids, and Mom made the most of it, teaching us how to sing 4-part harmonies. We’d sing songs like Ferlin Husky’s “On the Wings of a Dove”, Hank Williams’ “I’ll Fly Away”, or even songs that got some radio airplay, like Ray Stevens’ “Turn Your Radio On”.

For a bunch of kids singing at church, we had a fairly deep immersion in country and gospel music. On Sundays before church, we’d watch TV programs like “Gospel Singing Jubilee“, where we got to see lots of Nashville-based gospel acts like the Rambos, the Florida Boys or the Happy Goodman family. (It took me decades to realize that Happy Goodman was an actual person, not a description of the family’s emotional state).

So, every Sunday, we’d watch gospel music, then go to church, and if Mom found a song she thought would be good for the kids to sing, she’d buy the sheet music and work with us to learn the songs for the next time we’d get trotted out in front of the church.

Most times, it was all four of us. Other times, however, it was just the girls, or just the boys. Occasionally, it was (gasp!) just one of us. Those were the times where the kids not on stage took on another role……how to get the singer to crack up laughing in the middle of the song.

Now, getting someone to laugh on stage is a subtle art – you can’t go waving your arms around or making noise, because some adult sitting nearby might see you, and take it on themselves to grab you by the neck or twist your earlobe to get you to ‘behave’. Even worse, if you got Mom’s attention while she was playing the piano, you’d get a spanking when you got home from church. Some times, the spanking wouldn’t wait, and you’d get it in the stairwell before you went home.

So, we became masters of the eye-roll, the smirk, and the twisted facial expression. Those were hard to detect from behind or at an angle, so they became the chief means of attack towards the singer on stage. Since we all had to sing at one time or another, each of us (but especially Jim and me) would try to escalate the effect each week, especially if we were the one who broke out laughing the previous time.

When it was my turn to sing, I would try to avoid eye contact and look at the rest of the congregation, or at least above their heads to reduce the possibility of catching Jim in my line of vision. I knew he’d be making some crazy face, so I would attempt to delay that possibility for as long as I could.

Looking above people’s heads was a generally good strategy. It minimized eye contact, and also gave the impression to the congregation that there was a higher purpose in the performance. To me, it wasn’t holiness…it was hoping that I wouldn’t accidentally look down and see Jim sticking his tongue out at me, or flipping his eyelids inside out to make me completely lose my place in the song.

So, most times I would escape unscathed, but more than once, I’d get three-quarters of the way through and relax because I thought I was off the hook. Right at that point, I’d scan the congregation and lock eyes directly with Jim, who sensed the opportunity and stuck his head forward, eyes bulging like some demented turkey. I completely lost it, laughing out loud and losing my place. The congregation laughed too, but I could feel Mom’s steely gaze look over at me, never missing a note….but letting me know that I was in trouble.

Now that I’m older, I can appreciate the work that Mom put into those songs, and I’ve developed an appreciation for gospel quartets and 4 part harmonies. I recognize their influence in other types of music, and how much the church influence all of American country and popular music.

Still, at the time, I was just happy to get to the end of a song without completely losing it.