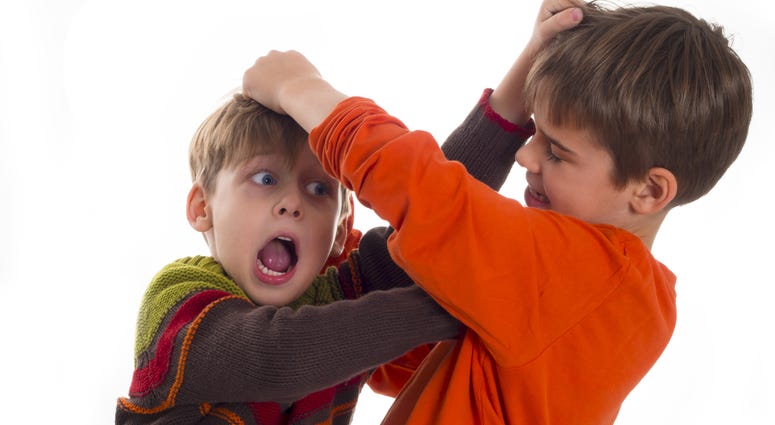 Growing up with siblings is probably a challenge for most kids, and boys even more so. My brother Jim and I were friends and enemies, collaborators and competitors. Being the younger of the two brothers, however, I was as much the target of hijinks rather than the instigator.

When I was 10 years old, we lived on a busy street across from a wooded plot where we should play all sorts of games, the more rambunctious, the better. While we played the typical games like basketball, baseball and tag, most games ended up more like football, with somebody getting tackled.

In almost every game, somebody got a bump, bruise or got their bell rung. Cuts, scrapes and minor issues were treated by Dr. Mom, while more serious injuries ended up in the emergency room. We were such frequent visitors that the receptionist would already be starting the paperwork as we came to the desk.

One hot summer day we didn’t have enough players for a basketball game, and the neighbor kids seemed to be off doing something else, so I was entertaining myself in the front yard, running from tree to tree, fleeing imaginary pursuers. Once that got boring, I looked around for something else to do.

Attached to one of the trees was a long rope. I think it was used for a modified jump-rope, when two players couldn’t find a third to hold one end. With a little imagination, I started thinking up new uses. At first, I used it for its intended purpose, twirling it as a jump rope, even if I didn’t have anyone jumping over it. I tried jumping it myself, but that proved to be more hand-eye coordination than I had at the time.

Next, I played at sending ‘waves’ down the rope as I jerked the rope up and down to create different wave forms. I’d yank one end, while watching the S-wave travel down the rope towards the tree attachment point. Science!

When I got bored with that, I came up with a new idea. I held the far end of the rope, and started winding myself towards the tree. I spooled the rope around my body, with the rope coils tracking up my sides. When I got next to the tree, I started spinning away like a whirling dervish, flying off the end of the rope, and tumbling end-over-end across the yard.

That was fun! I wound myself up to do it again. I spun even faster, tumbling even further at the end of the rope. I had created a new game out of nothing more than the available tools, and spooled out multiple times, getting dizzier and dizzier as I went. With the yard spinning in front of my eyes, I’d stagger back towards the tree, ready to go another round.

What I didn’t notice, however, was that my brother Jim had been watching from the porch. He thought that the spinning looked like fun, but there had to be a way to kick things up a notch, as older brothers often do.
As I coiled up for the next spin, Jim inquisitively watched me. What I didn’t realize at the time wat that he was plotting the ideal time to make his move. I took a deep breath and started spinning away yet again.

As I fell towards the ground, I didn’t have time to put my hands out, and hit the ground hard. My elbow bounced off a rock, and I immediately felt a huge, searing pain run up and down my arm. I yelled out – “My arm’s broke! My arm’s broke!” Since I had two broken arms prior to that (I had a busy childhood) I was familiar with the feeling, but something was a bit off. I looked down at my arm, and instead of the typical signs I was used to, my long sleeved shirt was bulging around my elbow.

Jim said – “WOW! Your arm’s really swollen” In a way, he was right. My arm was swollen, but not because it was broken. When I hit the rock, it popped my elbow out of joint and dislocated it. With the out-of-joint bone pressing on nerves, I was in extreme pain, and could only alleviate it by holding my arm up in the air.

Once again, Mom threw me into the car, and sped off to the emergency room. Once we got there, I held my injured arm up with the other, and waited for the doctor. He came in, looked at me, and said, “You again?” I nodded and sniffed back the tears. The doctor gave me something to relax my muscles, and said, “This is going to hurt a bit.” I held my breath and winced as he popped my elbow back into the joint.

Immediately, I felt better, and breathed a sigh of relief. My arm still hurt, but now it just felt sore. The doctor wrapped my arm in a cast, put on a sling, and said, “How did this happen?” I replied – “My brother tackled me while I was spinning.” He chuckled and said, “Next time, stick to basketball.”