What I Learned From Star Trek Movies #2: The Wrath of Khan

When Star Trek: The Motion Picture made enough money to justify a sequel, you could almost hear millions of Star Trek fans breathe a sigh of relief. NOW….we’d get to see a REAL Star Trek movie. Well, we almost didn’t.  The Motion Picture was over budget and underwhelmed at the box office. It made just ENOUGH money to warrant a second try at it.

Which almost didn’t happen. Leonard Nimoy only came back to his role as Spock because his character was supposed to be killed off early in the movie. DeForest Kelley didn’t like his dialogue, and George Takei had to have Shatner plead with him to join the cast. Gene Roddenberry developed the first script, which involved the crew time-traveling back to try and correct a timeline where JFK wasn’t assassinated.  (not that they hadn’t already done that exact same storyline before.)  Gene Roddenberry was forced out as director. In just 12 days, the production team created a new script.
Instead of the bland, antiseptic look of the first movie, the actors went back to bold colors and more traditional / military type uniforms. There was real ACTION in this movie. Instead of a formless, unrecognizable alien presence…..there was a real bad guy in this movie.  Harve Bennett made the decision to bring back an old nemesis of Kirks’….and play up the theme of revenge.
On a parallel track, Kirk’s story starts with his concerns about getting older, and feeling useless, now that he’s been ‘promoted’ out of his old job in the captain’s chair. Instead of feeling glad…he’s feeling like he’s been put out to pasture…which were themes a lot of people could identify with.  So, from the get-go….this was a movie that was going to be a much closer match to what its audience wanted.
Shot in less than 12 weeks, on a budget one quarter of the first movie, it was like shooting a made-for-TV movie of the week. But what the first movie lacked from Star Trek’s DNA, this had it in spades. Conflict, humor, action….and a real villain! Instead of trying to rein in the actors, the director let Ricardo Montalban and William Shatner chew the scenery like it was made of actual ham. 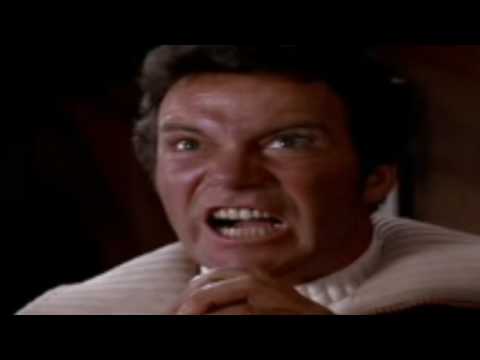 …and chew they did – spouting lines from Dickens and Melville, with a few Biblical references thrown in, the story had some actual substance. It played on a number of themes that resonated with audiences, including revenge, friendship, aging, death and rebirth.
It had a number of great dramatic reveals and surprises, from the initial discovery of Khan, to his first attack on the Enterprise. It included some great plot twists, like dropping the Reliant’s shields by remote control….with Kirk delivering the lines…”Here it comes…”, to the film’s climactic scene where Spock sacrifices himself to save everyone else. (Don’t get upset at the spoiler, the film came out in 1982). That scene is one of the few in which guys are actually allowed to cry, the other two being “Old Yeller”, and “Brian’s Song.”
At the end of the movie, despite the loss of a beloved character, it ends on a hopeful note, with the journey still not complete, with the memory of lost friends still with us. I don’t know if I’ve actually counted how many times I’ve seen it….but it’s a movie that I can still go back and watch again, knowing exactly how it’s going to turn out.  That’s the way it is with our favorite books and movies – each time we come back, the story may be the same….but we’ve changed, and with that, we learn something new each time we return.
What I learned from Star Trek: The Wrath of Khan is….
The needs of the many outweigh the needs of the few…..or the one.
Categories: collaboration, Dedication, Personal Development, Speaking, Star Trek, Success, TenacityBy David HollingsworthJune 9, 20141 Comment
Tags: Star Trek
Share this post
Share on FacebookShare on Facebook TweetShare on Twitter Share on LinkedInShare on LinkedIn