What I Learned From Star Trek Movies #1: The Motion Picture

When I was a kid, I loved watching the original Star Trek series (ST:TOS to die-hard fans). Many a Saturday afternoon was spent watching re-runs in syndication, to the point where I knew the episodes, the plots, the twists…and even the dialogue. So…when I found out that Star Trek: The Motion Picture (ST:TMP) was coming out, I knew I wanted to see it. We were just off the heels of the first Star Wars movie, Close Encounters of the Third Kind was a hit…..and ST:TMP just HAD to be the BEST.MOVIE.EVER. It had the original cast, great special effects, a leading lady who SHAVED HER HEAD to play the role….I mean, how could it miss? 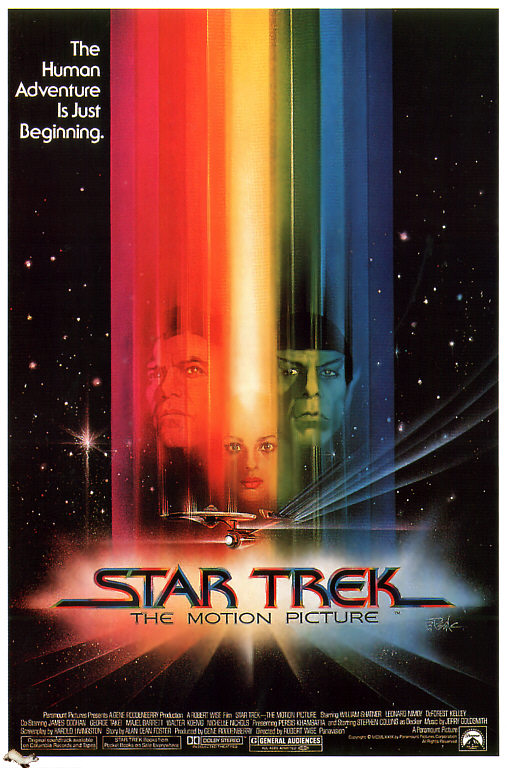 Well, miss, it did. While it looked great, and had a couple good moments, it was 2+ hours of watching actors watch special effects. Reaction shots can be useful….if there’s something to react to.  Despite being a big budget sci-fi pic, they took away almost everything that made ST:TOS fun. Instead of bold colors and lots of action….everything was sanitary, gray and antiseptic. The future was CLEAN.
It was also boring. There were no aliens in rubber suits, no dramatic tension between Spock and McCoy, no Kirk romancing green women, three-punch fights, or wearing a ripped shirt. Just a lot of what was essentially watching the original ST cast watching other things. Still, I watched. I was so in love with the IDEA of Star Trek, that I settled for a half-baked attempt at an epic motion picture. Unfortunately, it was missing the epic part….and the motion part, too.
Why did the movie fall so short of expectations? There are lots of reasons, I’m sure…but I think the biggest reason is that the producers missed the core reasons audiences fell in love with the show in the first place.  First, we watch movies to be ENTERTAINED. If we wanted to see beautiful pictures (and only pictures), we’d go to an art museum. If it’s a space epic…there’s got to be action and movement. Second, we like stories in which we can identify with the characters. Star Trek wouldn’t have been nearly as enjoyable if it weren’t for the dialogue and chemistry between the actors. We wanted the derring-do and charisma of Captain Kirk, the intelligence of Mister Spock, the ingenuity of Mister Scott, or the poise and beauty of Lieutenant Uhura. In ST:TMP, all the characters were reduced to bit players in a movie about something much bigger than them. In movies we enjoy, there’s at least some sense of scale between the heroes and villains. In this case, it may as well have been Bambi vs. Godzilla.
Finally, we watch movies that have a theme that resonates with our human nature. In this case, there was nothing to resonate with. Earth sends a satellite out, aliens find it, fix it and send it back home, almost destroying the universe in the process. It’s like taking your car to the shop and having it come back as Optimus Prime. Exciting on one level….but nobody went home feeling like they grew in the process.

The future….is a bit bland.

While it was a big disappointment from an entertainment and fan perspective, it (fortunately) made enough money to make a sequel….which I’ll save for the next installment. The main lesson I learned from Star Trek: The Motion Picture is….
Big, shiny and new things aren’t necessarily better.
Categories: collaboration, Customer Service, Personal Development, Speaking, TechnologyBy David HollingsworthJune 6, 2014Leave a comment
Tags: Star Trek
Share this post
Share on FacebookShare on Facebook TweetShare on Twitter Share on LinkedInShare on LinkedIn