Having just finished the C.R.A.S.H.-B. sprints on Saturday, I took the Amtrak train up to New York for the Empire State Building Run-Up. It was an exciting event, from the training and fundraising leading up to the climb….to the event itself. 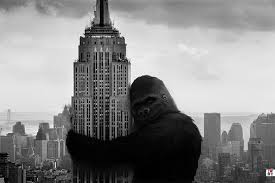 I had one fundraising goal – to raise $2500 for the MMRF. That’s what I needed to do to qualify or the team. I didn’t set my sights higher initially, because I had never done fundraising before…..and, if I had to write a check myself, I could take that hit and still survive. It would hurt, but at least it was tax-deductible.

Being new to this, I got publicity any way I could. I got a story in the company e-mail newsletter, and was able to place a story in the Fairfax Times. The article was re-printed in the Washington Post, and even my hometown newspaper, the Kokomo Tribune. I posted stories on Patch.com, this blog, and my neighborhood Nextdoor.com site. Between those outlets, Facebook, LinkedIn and an e-mail campaign, I was able to reach nearly 80 individual donors – who nearly doubled my initial goal.

I got donations from neighbors, newspaper readers, and friends from all around the country. I even got donations from Germany and Australia. I was very happy with the results…but those paled in comparison to the fundraising efforts of others. Several people raised over $50,000. All told, we raised close to $800,000 for the MMRF for a one-day event – all from donations.

Two weeks prior to the Run-Up, I broke my toe in training due to all the constant pounding on stairs. I was afraid to go to the doctor, since they might pull me from the event, so I Googled “How to treat a broken toe.” WebMD (and several friends) said ‘tape it to the next one’, so that’s what I did. I also modified my ‘run’ to more of a hike, taking two stairs at a time, and using my arms to pull me up the stairs.

The night before the Run-Up, NYC got 4″ of slushy snow-mess that made walking around the city a challenge.  I stepped on what I thought was pavement….which happened to be a 12″ deep puddle of icy water. As my feet were soaking wet and rapidly turning blue, I started looking around for a store that might sell boots……and socks…..or at least garbage bags that I could put over my feet so that I didn’t get frostbite.

I got up at 6AM to meet the MMRF crew on the set of Good Morning America – we were mostly ‘background’, but it gave us an opportunity to get our signs and jerseys on camera a number of times. It was exciting to be there to see Robin Roberts, George Stephanopoulos, Amy Robach and Ginger Zee do their job. There are a lot of moving parts you don’t see on camera….and the crew worked hard to make sure everything went off without a hitch.

My shoes hadn’t dried out from the night before, so once we left ABC’s studios, I resumed my search for dry footwear. I saw a City Sports store with a sign that said “Winter Clearance Sale”. I ran in, bought a pair of Sorel boots (on sale!), some dry wool socks, new running socks…and sprinted back to the hotel to stuff my ASICS full of newspapers and dry the insoles. It wasn’t a cheap solution, but a necessary one.

The Run-Up is done in a 2-hour block on a weeknight, since that’s the slowest time for tourists, who make a lot more money for the landlord than this event did. Our team gathered in the Heartland Brewery on the Empire State Building’s ground floor.

As the start time approached, the organizers gathered the ‘burst wave’ of elite athletes for their start time. I’m more concerned with staying upright than I am being fast, so I held back for the time trial wave – one runner going off every 5 seconds.

We saw the burst wave go off….then it was our turn to step up to the line, one at a time. Finally, my turn came, and the volunteer said, “GO!”. I ran to the door and started heading up.  Immediately, it felt different than my training. The stair runs were longer, the pitch was different…..and I was quickly blowing my heart rate way over my target. I had to work to calm myself down and try to settle into some semblance of a pace.

The first 10 floors seemed to go by fairly quickly, but I could tell it was going to get tough. With floors 11-20….I was still going OK, but starting to feel it. By the 30th floor, I was feeling a bit overwhelmed – I could continue to do two steps at a time….but I didn’t know if I would make it at that pace……so reluctantly, I went to 1 step intervals. There was a water stop somewhere around the 33rd floor, where I grabbed a cup, and took sips for the next 10 floors.

By the halfway point (floor 43), I felt like I was in trouble. I was WAY overheated, and tried to stop thinking about how much further there was to go. Pace wise, I was on target….but I didn’t know how long I could sustain that. By the 50th floor, I was having serous doubts. The 2nd water stop came at floor 62….and I really needed it. I tried to only think about getting to the 70th floor.

At 70…I thought about just pulling over and taking a break. I didn’t want to stop, because while I’d recover a bit, it would take a lot more mental energy to get going again….so I kept chugging along, pulling up the banister. Something happened around floor 72 – I realized that there were only 14 floors to go…and I only focused on the next floor. 73…(13 to go)…74 (12 to go)…then I was in single digits…..and floors 84-86 seemed hard…but they went by quickly.

At the 86th floor….I came out to dozens of camera flashes and cheers of supporters, race officials and volunteers I was finally able to catch my breath and get my finishers’ medal – because there’s not a lot of room up there, we were quickly shepherded to the elevator back down….and got to see runners still queuing up for their turn. As we walked back into the Heartland Brewery with our medals,  it was great to get applause from total strangers.

All in all, what started as a distant ‘bucket list’ item was now a reality. I may have climbed the stairs myself, but I had a lot of help from all the individual donors, and at the time I was one of fewer than 7,000 runners who’ve climbed the Empire State Building. At the same time, I got to be part of something bigger, raising awareness, visibility and funds for the MMRF.

Now, when I look at what seems to be an insurmountable obstacle or an unreachable goal, I know I’ve got this in my back pocket as proof I can do something like this…..and when I walk by the Empire State Building….it doesn’t look nearly as tall.