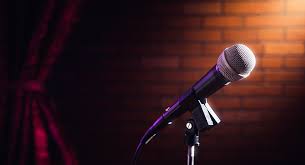 Ever since I can remember, I’ve had a tendency to be a smart-aleck. When I was 10, my Mom was buying some sodas and asked “What do you want?” I said, “A Cadillac, but I don’t think that’s happening.” I didn’t get any laughs from the audience.

When I was in sixth grade, I signed up for the talent show. I could do some impressions of cartoon voices, and did a spot-on version of Bill Cosby’s “Baseball” from “To Russell, My Brother, Whom I Slept With”. Now, this was decades before Mr. Cosby fell out of favor, so at the time, it was still OK. In addition, I think there was something a little novelty about a 12-year old white kid doing a Bill Cosby impression.

A number of other kids were chosen for the talent show, too. There were a couple of talented kids who played the piano, some who sang, as well as a baton twirler, who had to be careful not to throw it too high, because of the low ceilings in the elementary school.

We ran through rehearsals several times, and as I got more confident in the routine, I worked on Cosby’s mannerisms and sound effects. As the talent show date approached, I got excited about the opportunity to show off in front of a real audience, instead of doing in front of Mom in the kitchen.

When Mom had to work, I was able to get back and forth to school on the bus, but if I got sick, sometimes, I’d spend the day over at Grandma’s house on the other side of town. About 3 days before the show, I came down with a fever, and Mom dropped me off for the day.

Now, sick or not, I loved going over to Grandma’s. There were all sorts of old books to read through, and Grandma was fun to talk with. Also, she would make chicken noodle soup or grilled cheese sandwiches while we watched “Jeopardy” on television.

This time, however, because I was feeling under the weather, I just lay down on the sofa and tried to keep the room from spinning. I alternated between sweating and freezing, and hoped the feeling would pass.

It didn’t. I kept feeling worse, and at some point, I couldn’t feel my legs. When I reached down to feel what was wrong, I started shaking violently as I experienced what must have been a seizure. Grandma came in, saw what was happening, and rushed me to the hospital.

At the hospital, they ran a battery of tests to try and figure out what was wrong. I got poked, prodded and palpated so much, I thought I was made out of Play-Doh. Eventually, they figured out I had some sort of infection, and my white blood cell count was so high, they kept me in the hospital for three days……which caused me to miss the talent show.

I’m not sure which was more disappointing, getting so sick, or missing the show. If they would have let me out, I would have still tried to get through the show, even with an IV strapped to my side. I’m sure it was for the best, though.

Since then, I’ve loved being on stage, especially when I can make people laugh. I have, however, replaced the Bill Cosby routines with my own material. It’s a lot less controversial.