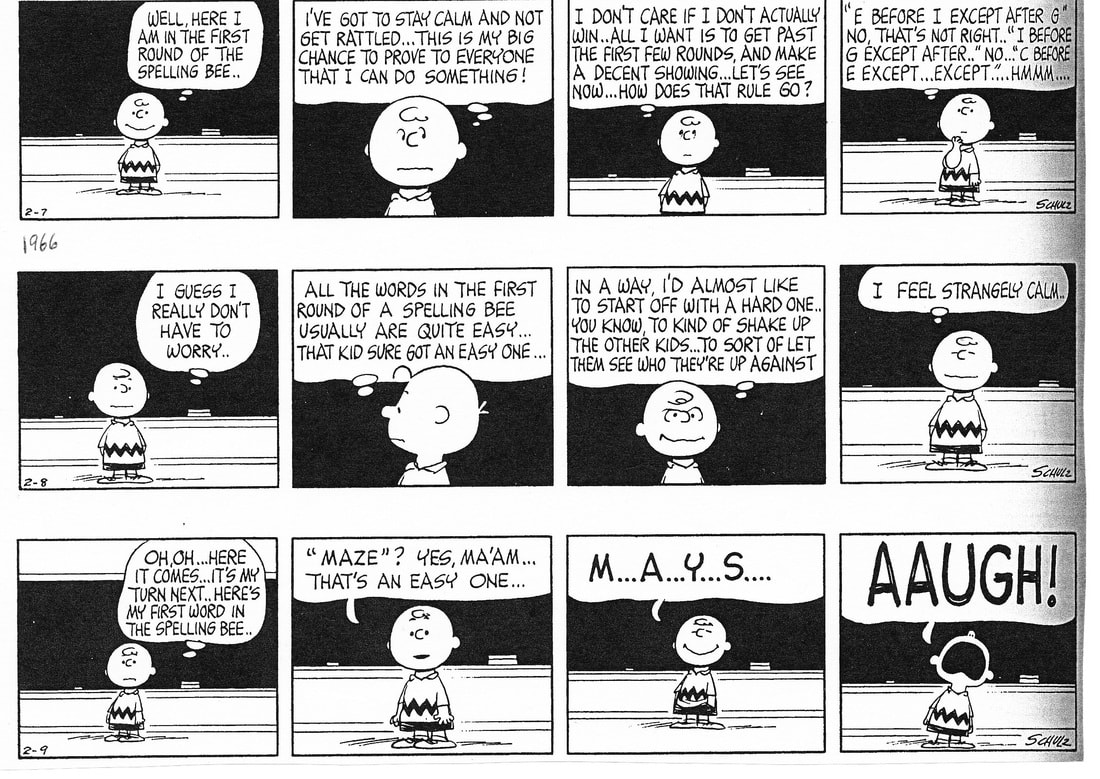 Even though I’ve never been a star athlete or big trophy winner, I’ve always been competitive. Whether it was playing Chutes and Ladders or racing bikes from school to home, I always competed to come in first. That rarely paid off in wins, but I still fought to do as well as I could.

Since I wasn’t that athletic, I had to focus on where I did well, which was on the academic side of things. I learned to read by age 4, and by age 5, I was reading everything I could get my hands on. I read every magazine I could find. I read encyclopedias for fun. When I couldn’t find anything else, I’d read the back of cereal boxes for breakfast.

In sixth grade, I was introduced to the competitive world of the spelling bee. Kids from 6th to 8th grade faced off in competition to see who the best speller was. The winners would go on to county competitions, followed by state championships. Winners of the state competitions would go on to the National Spelling Bee in Washington, DC.

Today, the National Spelling Bee is broadcast on ESPN, and viewed by several hundred thousand viewers. Back when I was in school, I was motivated by the Peanuts cartoon where Charlie Brown competed to be the best speller in the United States.

In 8th grade, my last year of eligibility, I signed up for my local school spelling bee, determined to do as well as I could. Once this opportunity was over, it would be on to high school, and spelling bee days would be over. It was either do or die.

On the day of the spelling bee, the classroom was filled with dozens of 8-14 year old kids, each one feeling like they’d be the one to win the trophy and move on to the next level. Those individual dreams were quickly dashed as students missed both easy and hard words that were read out in random order.

One by one, the other students fell. If they missed a word, the judge would ring a bell. “DING!” Some would gasp, others would look down, but each one turned and slowly walked out of the room as their spelling bee dreams came to an end.

Eventually, it came down to the two of us – me, and my friend David. Now, I wasn’t my own best friend…..we just happened to share the same first name. We were both in a lot of the same classes, and both played in the junior high band. We were friends, but today, all bets were off. The winner would be named David – the only question would be which one.

We went back and forth, matching word for word. Both of us were gunning to win the competition, and neither one of us was willing to back down. David would get a word, and spell it handily. He’d smile confidently, and sit back down. I’d step up, and knock down the next word. Back and forth, we’d match each other word for word.

As the competition wore on, we could tell the teacher was getting tired, but we kept trading places word for word. While some times one of us would ask for a word to be repeated, defined, or used in a sentence, we were both reluctant to show any sign of weakness by asking for help.

Long into the competition, I got my next word –

I was cocky. I felt like I knew what they were saying, and didn’t need it used in a sentence. I didn’t even need a definition. It sounded like it had the word “force” in it. It must mean something about the way force was used. That HAD to be it. I stepped forward, and spelled it out.

It sounded correct, and I smiled as I used the exact same pronunciation as the teacher.

DING! The judge rang the bell, and my heart sank.

The teacher gave David the next word, which he spelled handily.

How could I have lost? I wasn’t used to this. I hung my head, and sat down. We both went back to class, and David was crowned the Spelling Bee champion. I got a big dose of humility that day. Over time, I learned to shrug off the loss, and attributed it to the luck of the draw. Still, that day, it really hurt.

We moved on to high school, and David moved away to another city. After he moved away, I didn’t think about it much, but a few years ago, we re-connected on Facebook. It’s been good to share our life experiences, and laugh about how big that competition seemed at the time.

I still haven’t forgotten that I lost, though. I’m just waiting on my opportunity for payback.