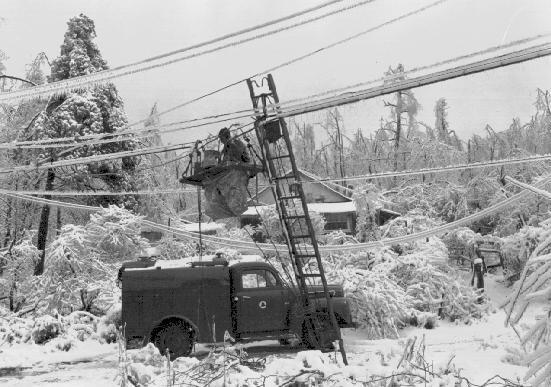 My 6th birthday was January 27th, 1967. Having a birthday during the winter can limit the options for birthday activities, but at least it was a month past Christmas, so I never felt like I got cheated by combining my birthday with the holiday. There was enough distance to justify presents for both, even if they weren’t extravagant.

Earlier in the week, weather was unusually warm. The morning of January 27th, it was raining, which was strange for that time of year. By my 6th birthday, I was used to snow on the ground and the occasional blizzard. I didn’t have school that day, because I didn’t go to kindergarten for some reason. I was already reading quite a bit, and I think my Mom thought I’d be too much of a smart-aleck to let the rest of the class get anything done.

When my older sister Pam and Jim got home, they were complaining about how cold and rainy it was. By that time, temperatures were quickly falling, and we had heard about a blizzard hitting Chicago. Ice had started to form on the trees and power lines, and my sister Pam wondered if we’d be going to church on Sunday.

I was much more concerned with more important things, like what kind of birthday cake I was going to have, and what kind of presents awaited when the candles were lit. Mom said I had to wait until after dinner, and THEN we could bring out the birthday cake.

In the afternoon before dinner, temperatures continued to drop, and I could see the tree branches and power lines start to sag from the weight of the ice that was growing by the hour. Right as Mom told us to clean up for dinner, the house went completely dark as the power failed. Mom quickly found some candles and a flashlight while she gathered my two older siblings, me and my 3 year old kid sister in the kitchen for a quick headcount to make sure we were all OK.

Fitz the cat (his real name) and Tippy, our dog stuck close to us in the kitchen while Mom called next door to make sure her parents were OK. The phone lines were still working, even if the electricity wasn’t. My uncles were right next door too, so Grandma and Grandpa were in good hands.

Our situation, however, was a bit more precarious. While it had been warm early in the day, the temperatures dropped quickly with the approaching winter storm. Our house was heated by an electric furnace, and it was quickly apparent that the house was poorly insulated, because the indoor temperature rapidly dropped below the ‘comfort level’ on the wall thermostat.

Mom gathered the four kids into the kitchen, and had my older siblings grab pillows and blankets from the bedrooms to lay on the floor for the kids. We helped her hang sheets in the doorways to preserve what little heat we had, and we congregated in the kitchen to formulate a plan.

We were fortunate to have a gas stove in the kitchen, because we were able to re-purpose it into a makeshift heater for the small space by propping the door open. We didn’t have carbon monoxide detectors in those days, but it must have been safe enough for emergency use.

Once the doorways were blocked and the oven working, the kitchen started to approach a comfortable temperature. Trips to the bathroom were outside the protected area, and consisted of a sprint past the doorway curtain with frosty clouds of breath during the absolute minimum of bathroom time required.

With the family and pets safe in the kitchen, Mom broke out my birthday cake and put 6 candles on it. She lit them from the stove, and everyone sang “Happy Birthday” to me. The cake had a parade of animal crackers in a circus train theme, with graham cracker cars, and it was delicious. My present happened to be a transistor radio, which came at a perfect time. We had enough batteries to get frequent reports on power and road conditions, and by Monday, power was restored.

I loved having a transistor radio and listening to music and the news on the radio. Being a kid, however, I wasn’t as careful about keeping the radio in good working condition. My little sister decorated the front with green crayon, and while it still operated, I didn’t like the new design. I tried scraping it off which helped some, but the red plastic still had enough green that it looked like a bad Christmas decoration.

One day, I sat at the kitchen table trying to figure out how to get the crayon residue off, when I came up with the brilliant idea of using some soap to remove the stain. I’d seen Mom wash dishes a hundred times, so it had to work on the radio, right?

I filled the sink with warm water and added some dish detergent while I listened to the news on WIOU 1350 AM. Once the sink was full, I got a cloth and loaded it up with soapy water to work on the crayon decoration. As I held it over the sink, I scrubbed while the announcer described the weather forecast. The stain was mostly removed, when….

My soapy hands lost their grip on the radio and it dropped into the sink. As it sank into the sudsy depths, Earl Nightingale’s gravelly voice quickly bubbled into a garbled mess. I reached down into the sink to rescue my red transistor radio. I grabbed some towels to dry it off, but alas, the damage was done. My radio was forever silenced.

After the furnace started working and things slowly got back to normal, I learned that my birthday was eventful for another reason. On the afternoon of January 27th, while I was opening presents and sharing cake in the candlelight of our kitchen in Kokomo, Indiana, astronauts Gus Grissom, Ed White and Roger Chaffee lost their lives when fire swept through the command module of flight Apollo 1 during an electrical test. I was a huge fan of the space program as a kid, and the news hit me hard. I watched every NASA launch and recovery I could after, knowing that a power outage was a minor inconvenience in comparison.