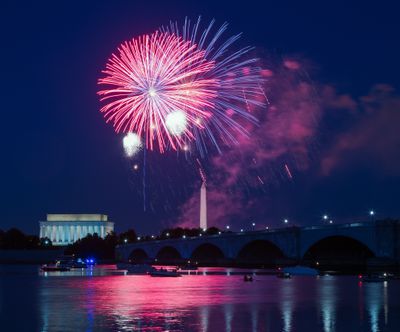 Back in 1984, I was in the Army, stationed at Fort Belvoir, Virginia. The 4th of July is a big deal in the United States, celebrating the signing of the Declaration of Independence from England on July 4, 1776. It has a lot of historical significance for this country. Mostly, it’s an opportunity to set off fireworks and blow up stuff.

As a Military Police specialist, I was trained to perform crime prevention and safety duties. Due to Reagan-era budget cuts, however, I was shifted over to lifeguard duty at an outdoor pool. Instead of traffic safety and law enforcement, I was reduced to blowing a whistle and yelling “No running on the deck!”

Although I had to work on many holidays, my pool schedule was free on July 4th. My buddies and I decided that we would head into Washington, DC to enjoy the Independence Day activities on the National Mall. Each year, there would be a big concert on the Mall, followed by one of the largest fireworks displays you could imagine.

The concerts frequently featured ’60s rock and roll icons The Beach Boys. The previous year, Interior Secretary James Watt banned The Beach Boys, because he said they attracted an ‘unsavory element’. In their place, the 1983 concert featured….Wayne Newton.

This year, though, The Beach Boys were back as the headliner act, with Ringo Starr sitting in on the drums. They were preceded by America, The O’Jays, Three Dog Night and Hank Williams, Jr. My buddies and I sat in the hot July sun, drinking beer and trying to stave off sunburn. We had fun singing along with the bands, but failed miserably in our attempts to impress nearby women.

By the time The Beach Boys played their closing number (“Fun, Fun, Fun”), we were tired, sunburned and ready to go. We had the choice of having around for another several hours for the big fireworks show….or heading back to the base. There was a carnival with rides and games, along with a small fireworks show at the end. Even though the big show sounded like fun, we were worn out and took a bus back to Fort Belvoir.

We took some down time when we got home to the base, grabbed a shower, and felt refreshed enough to check out the carnival. By this time, the sun was setting, and we had fun eating unhealthy (but tasty!) carnival food and trying to keep it down on rides like The Scrambler.

By 9PM, it was time for the fireworks show. It may not have been as big or fancy like the one downtown, but it also didn’t have half a million people crammed in all around us, either. We sat close to the front of the baseball field in our lawn chairs, just beyond the safety tape, and waited for the show to begin.

SHOOP! The first shells went up into the sky, trailed by a shower of sparks. POW! The missiles exploded into flowery blooms of reds, yellows and greens. More shells hissed into the sky, followed by explosions of light and color, accompanied by “Oohs” and “Ahhs” from the crowd below as the fireworks CRACKLED down from the sky. This might have been smaller, but it was much more relaxing than downtown.

Occasionally, a shell would explode lower than expected with a powerful BOOM! The spectators went “Wboooa” in unison. A bit of silence followed, but then the shells were going back up into the sky to the crowd’s delight. As the show went on, the explosions got bigger, with one or two going off lower than felt comfortable, but not so much as to stop the show.

SHSSSSSSS! We watched what looked like a large shell shoot off the launching pad. This was going to be a BIG one. It rocketed toward the sky, but instead of going up all the way overhead, it seemed to stop, frozen in mid-air, hovering for what felt like an eternity.

When the shell seemed like it couldn’t stay in the air any longer, it slowly rotated in the sky….and rocketed DOWN towards the launch pad. I quietly mumbled to myself….”This can’t be good.”

It’s hard to describe exactly what happened next. The shell accelerated towards the ground, hit directly in the middle of the fireworks launch pad, and EXPLODED on the ground. KABANG! That set off the ENTIRE fireworks display, with shells shooting into the crowd, the sky, and into nearby cars.

Families grabbed their children and spectators ran in all directions as KABOOM! fireworks exploded all around us, CRACK! Flashes of light and loud BOOMS! went off everywhere, while my gang sprinted for cover. I dove behind a large station wagon and peered through the windows while the pyrotechnic melee continued.

It seemed to go on forever, but eventually, at some point, the frequency of explosions diminished, with the occasional FIZZZZZ! but finally, stopped. The field was eerily quiet, with dazed spectators staggering through the smoky scene like B-movie zombies. I found my buddies, and we looked around for anyone who needed help. While a lot of people looked overwhelmed, there were no serious injuries. We helped folks load up their lawn chairs and headed back to the barracks.

Things were pretty quiet that night, with the occasional “Did you see that?” comment about the more spectacular explosions. As I drifted off to sleep, I made a mental note for future fireworks shows:

Don’t sit so close next time.