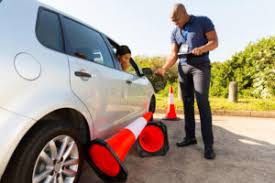 The final barrier between a 16-year old and (relative) freedom is getting actual drivers’ license. Now, by this point, I had been driving a little over a year, but on a learners’ permit, and with a parent sitting in the passenger seat. I was ready to graduate from two wheels and parental supervision to four-wheeled independence. Only one thing stood in my way – the license exam.

I had no qualms about the written exam. I got good scores in Drivers’ Ed, and did well on all my practice tests, however, I had heard lots of cautionary tales about how tough the road test was. Friends told me of classmates who had failed the test multiple times, and even one who wrecked their car while taking the exam.

They warned me of one examiner in particular, who was known for flunking kids simply for not adjusting their mirrors properly. I made a mental note to see if I could figure out if they were working the day I was scheduled to take the exam.

After going through the book what seemed like hundreds of times, and my family getting tired of me driving to and from church multiple times a week, I scheduled my exam for the earliest possible date, even though Indiana winter weather could potentially interfere with my plans.

On the big day, I woke up early and opened the curtains to check the weather. While we had some big snow a few days before, there wasn’t any new accumulation, for which I was relieved. I showered, brushed my teeth, and drove with my Mom to the local Indiana BMV office. It was in a low-slung, non-descript building an in industrial section of town. We parked her brown 1976 Buick Regal in the lot, and went inside.

I pulled a number out of the ticket dispenser, and checked it against the sign that said “Now Serving Number”…..12. My number was 18, so we didn’t have long to wait. Mom went off to chat with another parent she knew, and I looked over my Indiana Driving Manual to make sure I was ready for the test.

As I thumbed through the book, I heard other numbers called….13, 14, 15….and all of a sudden, I heard, “Number 18, last call for Number 18!” I snapped to, sprung to my feet, and rushed to the counter, waving my birth certificate and learners’ permit to make sure I didn’t lose my place in line.

The BMV clerk looked over her horn-rimmed glasses at me, then down at my paperwork to make sure everything was in order. She handed me a blank scan sheet, a #2 pencil, an exam booklet, and told me to start my test as soon as I was ready. I thanked her, and rushed to my seat.

The questions seemed pretty easy for the most part, but some asked how many feet to signal before passing or changing lanes, and I couldn’t remember, so I just guessed. I ran into a tricky one that asked me whether I should pay attention to a stop sign or a police officer….and thinking I should never disobey a stop sign, so I guessed again. I finished the exam and handed it back to the clerk.

She moved her glasses from the chain around her neck, and looked over my test. I heard her click her tongue a couple of times, and I hear the unfortunate sound of a pen marking an “X” on the questions I missed. Fortunately, I made enough correct choices to pass. She said, “Congratulations, only one more thing to go…” and pointed to a line of chairs under a sign that said “Road Test”. I swallowed hard, walked over, sat down, and waited.

It was only a few minutes until the side door swung open, followed by two people. The first was a stern-looking middle-aged man with glasses and a clipboard. The second was a sullen-looking teenager who shuffled along, looking at the floor, with the unmistakeable look of failure. He had just flunked his road test.

The tester went to the counter, looked at a list of names and barked, “HOLLINGSWORTH!”. I jumped to attention, and almost saluted. He looked me up and down, and said, “You ready?” I silently nodded, trying not to make any noise from my teeth chattering or knees knocking in fear.

He zipped up his coat, put on a hat, and pointed his clipboard towards the door. “Let’s get a look at your car.” I had to get Mom’s attention, since she still had the keys. I frantically waved at her from across the room, but she was absorbed in conversation with someone she knew from work. After little success, I quickly said, “Excuse me”, and sprinted over to get the keys from Mom. She dug around in her purse for what seemed like an eternity, then handed them to me.

I rushed back to the instructor, and we marched out into the snowy parking lot. I tried to remember all the essentials – 1) Walk around the car, looking for any damage or faulty equipment. 2) Unlock the doors, get in, and put on my seat belt. 3) Adjust the seat and mirrors. Next, I started to put the keys in the ignition, before hearing a loud “AHEM”….I stopped mid-key insertion, and looked over. The instructor said, “Aren’t you going to check MY seat belt?” I started to reach over, and he slapped my hand away – “You only need to ask. You don’t need to do it FOR me.”

I turned about 3 shades of red, and meekly asked, “Is your seat belt secure?” He snipped, “Yes. You can start the car.” I swallowed hard, put my foot on the brake, and turned the key. The 350 cubic inch V8 engine roared to life. I checked the mirrors once again, and the instructor said, “You ready?” I nodded, and he said, “OK, let’s go.”

He had me do a lot of the basics in the BMV parking lot – backing up, checking for traffic and basic parking. Satisfied that I wasn’t going to kill him, he pointed the clipboard towards the street, and said, “Let’s head out.” I signaled, looked both ways, and pulled into traffic.

For an outside observer, the next few minutes were fairly mundane, even if I was sweating bullets. It was just a plain brown Buick sedan driving around downtown Kokomo, but for me, it was a do-or-die, life-changing experience. If I made it through the test it meant freedom. If I didn’t, it meant failure and ridicule from my peers.

I was a bit too hard on the throttle and brakes at times, but the test seemed to go well. After about 15 minutes of driving, the instructor said, “Now for the tough part – parallel parking”. I gulped. I was good at angled or head-in parking, but parallel parking separated the real drivers from the learners’ permits.

The instructor pointed to a clear spot on the curb about a block ahead. “Let’s see how you do up here”, and wrote something down on his clipboard. I looked at the spot and my heart sank. While it hadn’t snowed overnight, the accumulation from the week before had hardened into a bunch of hard, icy ruts that were going to make parallel parking an almost impossible feat.

I pulled alongside the car in front of my designated space and turned on my right turn signal. The instructor put a check mark on the exam form. I looked up at my rear view and at both side mirrors. Another check. I put my foot on the brake and shifted the car in reverse, looking over my shoulder. Another check.

I eased the car back until the rear door cleared the bumper of the car in front, then turned the wheel hard to the right to start backing into the space. as my front end cleared, I turned it hard to the left to finish backing in, and straightened the car, stopping just short of the car behind me, then aligning the steering wheel, pulling forward to center myself in the space.

I heard the instructor’s pen mark off several more checks, then make a distinctive ‘click’. I waited, for what seemed like an eternity as I braced for his verdict. He didn’t say anything at first, then said, “OK. Let’s go back to the BMV.” Feeling like a weight had lifted off my shoulders, I hit my turn signal, checked my mirrors, and prepared to pull out of the space.

That’s when I realized something was wrong. I was pushing on the accelerator, but the car wasn’t going anywhere. As I began to panic and look around frantically, the instructor said, “It’ll work better if you take the car out of Park.” I looked down, and melted into the seat as I realized I hadn’t put the car into gear.

I moved the shift lever to “D”, and looked again before attempting to pull out. The icy street made it hard to maneuver, but I was able to get out of the space without hitting anything, and slowly drove back to the BMV. We pulled back into the lot, and I shut the car off. The instructor marked a few more things on his clipboard, and we went inside. He pointed to the chairs at the door and said, “Wait here.”

Mom caught my eye and made a gesture that looked like “How did it go?” I shrugged back, and sat down to wait. After about 5 minutes, I heard my name again. I jumped up and sprinted to the counter. The instructor eyed me up and down. He said, “I COULD have failed you for not taking the car out of Park back there….” My heart sank……”but if you pay attention, I think you’ll do fine. Congratulations.” He handed my paperwork back, and pointed to the photo booth, where I got my picture taken, and just a few minutes later, received my license.

There are a lot of milestones in one’s life, but few come with as much of an emotional impact as getting your first drivers’ license. I left that day with a love of being behind the wheel, and decades later, it hasn’t ebbed one bit.