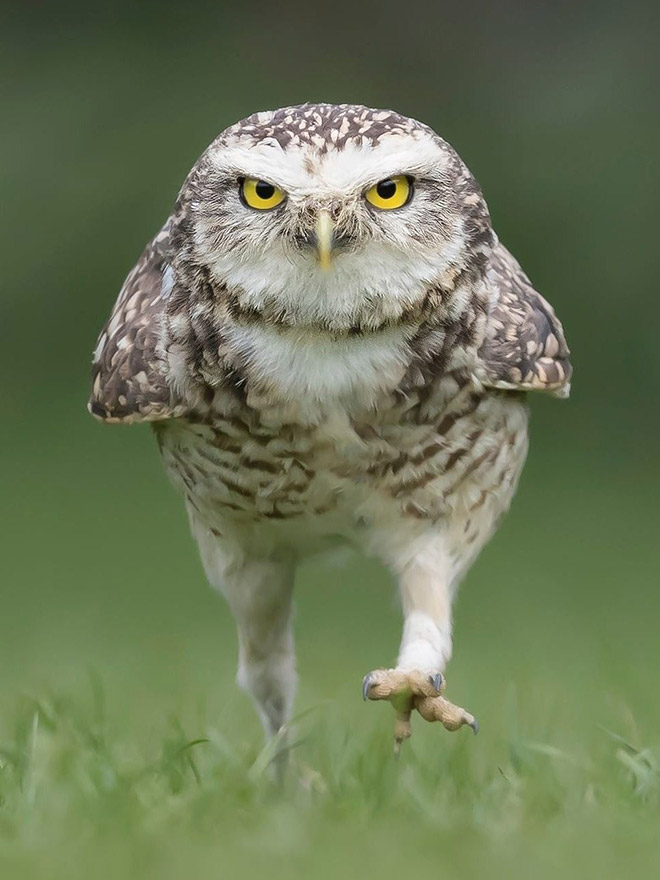 Living in the city limits of Kokomo, Indiana, we didn’t run into a lot of wildlife. Sure, there was the occasional stray cat, roaming pack of dogs, and overly inquisitive squirrels, but most of the time, if we wanted to see anything truly wild, we’d have to take a trip to the Indianapolis Zoo.

One Saturday in late October, while I was busy watching cartoons at my grandmother’s house next door (because she had a color television), I heard my brother Jim shout, “HEY! COME LOOK AT THIS OWL!”

Now I was initially doubtful, because the only owls I had seen were on television, and seemed to be primarily concerned with how many licks it took to get to the center of a Tootsie Pop. (for those who didn’t grow up in the 60s, the answer was three).

Jim kept yelling, so I switched off the latest episode of ‘Underdog’ and headed outside towards the sound of his voice. Sure enough, about 20 yards ahead of him, right in the middle of the day, was an owl, sitting on the ground, facing away from us.

Jim and I looked at each other, not really sure of what to do, so we took the least sensible option of trying to sneak up on the owl. We advanced, step by step, trying to coordinate our steps and breathing so that we didn’t alert the owl to our presence. I’m not sure that we had any actual plan of what to do when we got TO the owl (who continued to face the other way, seemingly oblivious to our presence) but we kept going.

Right when we were about 6 feet or so from the owl, we paused and looked at each other to try and silently work out a capture plan. We had no nets, snares or boxes, so apparently, the strategy was just to grab it, which made perfect sense to a couple of 6 and 7 year old boys. Right as we started to move forward, the owl’s head turned 180 degrees and looked right at us.

We screamed and sprinted back towards the house. It was a few years before “The Exorcist” came out, but even then, we knew that heads weren’t supposed to swivel that far. Jim and I got one of our uncles (nicknamed, “Boy” – don’t ask). Boy grabbed a big cardboard box and headed out with us to attempt to capture the owl.

Once we took a more careful look, the reason the owl was out in the daytime was apparent, It had a slight injury to its wing, and could only fly a few feet before having to land again. Boy had us distract the owl from one side, and when we had its attention, dropped the box on top of the owl, and secured the opening.

Boy carefully carried the box inside Grandma’s house, making sure not to disturb the owl any more than necessary. He called the local animal shelter, and asked them what to do. They told him just to keep the owl in a safe area, and they would come by a few hours later to take it to a wildlife rehabilitation center.

The owl sat inside its box, just under the kitchen table, not making much noise other than shuffling around the box from time to time. If we looked carefully, we could see the glint of its eyes shining back from inside the box, but we knew to stay away from the box itself. The dog (appropriately named “Dog” – again, don’t ask), wasn’t as careful. He smelled something interesting inside that box, and was determined to find out what it was.

We were able to keep him away from the box for his first couple attempts, but while we weren’t looking, Dog slid under the kitchen table. Before we knew it, he saw the opening in the the top of the box, and stuck his snout in, trying to figure out what was inside. Suddenly, there was a jumble of flapping wings, crumpling cardboard, and a dog sprinting towards the front door, yelping all the way. Dog never approached the box a second time.

Around mid-afternoon, the animal control truck showed up. A man in green coveralls and thick gloves reached into the box, and checked the owl for any major injuries. He loaded the box, owl and all, into the truck, and pulled away. Our brief Wild Kingdom adventure was over.

Or so I thought.

Saturday night was bath night at our house. I was finishing up my bath, and just about to drain the tub, when I heard my brother Jim shout “THE OWL IS RIGHT OUTSIDE!” Now, I’ve always considered myself as someone who thinks about things before leaping into action, but back when I was 6, my planning skills weren’t well-developed.

I leaped from the tub, and sprinted right out the front door, neglecting to drain the tub. Or dry off. Or even put on any clothes. I did, however, grab a skeleton Halloween mask off the table before running outside. Right past Mom, and one of the neighbors, who were talking in the kitchen, who sat there, stunned. To this day, I’m not sure why I ran out like that. As I said, my planning skills weren’t well-developed.

By the time I got out on the front porch, the (different than earlier) owl was long gone, and Mom grabbed me by the wrist, pulling me back inside to get some clothes on. In an exasperated tone, she said,

“It’s bad enough you ran outside naked. Why in the world did you put on a mask?” I replied in a way that made perfect sense to my 6-year old brain.

“I didn’t want the owl to recognize me.”