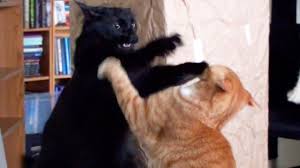 I’ve never had a time in my life where I didn’t have a dog, a cat, or multiple instances of both. I don’t know what I would do with my time if I didn’t have to walk a dog, fill a food or water dish or scoop out a litter box. Some times I don’t know who’s working for whom.

In the Spring of 1969, my mom married my stepfather, and we moved across town to a nice quiet neighborhood on the West side of Howard County, just outside of the city limits. While our neighborhood was a typical example of suburban living, there were giant cornfields just down the street to remind us of just how close to ‘country’ we were.

When we moved, my two sisters and my brother packed up all our belongings and moved into our new (to us) house. Jim and I shared a bedroom, as did Pam and Jennifer. While the house seemed incredibly spacious to us, the house was packed pretty tightly, with my Mom, stepfather, and his three kids as well. The only person who didn’t share a bedroom was Judy, who (wisely) defended her privacy.

In addition to all the people, we brought along our dog Tippy and cat, Fitz. Fitz was short for “Fitzwilliam Lee Black”. My sister gave the cat that high-status name after seeing a Dick Van Dyke movie called “Fitzwilly” and felt that the cat should have more than just a nickname, so she endowed him with the full moniker. I couldn’t think up a name that complex. I just called him ‘Kitty’. (as did everybody else in the house).

The pets had to make accommodations, too – because Judy already had a bit orange tabby named Bill. Bill was fairly reasonable, and relatively friendly…except when it came to Fitz. Whenever one cat would cross over into the other’s perceived territory, tails would inflate, backs would arch, and howling like you wouldn’t believe filled the air.

Now, as an 8-year old kid, I was fascinated by this sound, and found no end of entertainment in it. In fact, I tried to ‘encourage’ its production by getting the cats in the same room to get the party going. Judy would get mad and throw a balled up sock at the cats (or me) for causing such consternation, and Mom would put additional chores on my list to remind me not to engage in such shenanigans.

One day, when the older kids were out, I saw Fitz headed down towards Judy’s bedroom, where, during the day, I knew that Bill slept, and I saw my opportunity. I walked behind Fitz to keep him moving towards Judy’s room, and when he took a left turn inside, I followed him in and closed the door behind me.

Bill sat on top of Judy’s bed, seemingly non-plussed by the new room occupants, because Fitz would usually see Bill and make a quick exit. Not this time. I wanted a show, and I was determined to make something happen.

Since I knew that the cats’ howling grew in volume and intensity based on how close they were, I decided to get the two cats going at full volume by reducing that distance to zero. I picked up Fitz around his torso, swung around towards the bed, and shoved Fitz and Bill together, face to face.

What happened next could mildly be described as a tornado of motion as Fitz decided that the shortest path between him and a quick exit was through me. The cats howled, all right, but in addition, teeth and claws were applied to give Fitz traction up my arm, over my head, and down my back to get to the door.

Amidst the howling, yowling and flying fur, I staggered to the door and yanked it open, allowing Fitz to sprint to safety. Bill climbed under the bed, and refused to come out. I stood there, in the middle of Judy’s bedroom, covered in black and orange fur, blood and 47 puncture wounds in my right arm and shoulder, along with a big scratch across my face.

Mom heard the commotion and ran down the hall, to find me standing there, stunned, unable to move from the sudden shock of feline fury. She grabbed a towel, a wet washcloth, and a big bottle of hydrogen peroxide, which she started applying liberally to the 47 puncture wounds (she counted them). I winced as the peroxide fizzed up on every cut.

Once she assessed the damage and stopped the bleeding, she threw me in the back seat of the blue Oldsmobile Delta 88, and drove me to the emergency room. By this point, I was a frequent ER customer, and I remember the receptionist asking if I needed a punch card to redeem a free doctor visit.

Once the doctor looked me over and cleaned up all the wounds, he added some antiseptic and gave me a tetanus shot for good measure. He talked with Mom, then bent down towards me and said, “Now, why in the world did you think that was a good idea?”

I looked up, and said, “Well, it sounded fun at the time.”

As Mom ‘gently’ pushed me towards the exit, I turned over my shoulder and said, “I guess you could call it…a catastrophe.”