This past weekend, I got to ride in The Assault on Mt. Mitchell. It’s a 102-mile ride, with over 11,000 feet of climbing, rated as one of the most difficult rides in the country, according to Bicycling Magazine. It had long been a bucket list item of mine, even more so since I had attempted the ride in 2008, and had to drop out at the 87-mile mark. 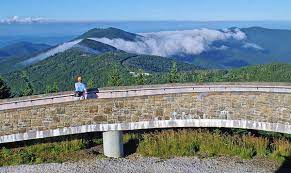 The ride itself is an interesting event. There are a lot of ‘century’ (100-mile) rides out there, but this one has a slight twist. For 73 miles, you ride though the South Carolina countryside, with some rolling (and some steep) hills, but nothing incredibly difficult. At the 73 mile rest stop, about half the riders are done with their day. At that point, 820 riders start the ‘assault’ on Mt. Mitchell, which is the tallest mountain east of the Rockies. Over the next 29 miles, riders start the ascent up towards the Blue Ridge Parkway, and then up to the top of Mt. Mitchell, 6,683 feet above sea level. Basically, you get to ride uphill for nearly 30 miles.  Some of the grades are fairly mild…but some top out at 15%, which feels like you’re climbing a wall.
So…back in November, I booked a hotel room, joined the Freewheelers of Spartanburg cycling club (to get an early entry), and started training. Because of the protracted winter in DC, I was stuck indoors until nearly April, giving less than 2 months to do any serious training. In the end, I was only able to get 3 longer rides to prepare, although two of them had some steep climbs similar (but not as long) as Mt. Mitchell. In the end, I decided that I was as in-shape as I was going to get, and took the weekend prior to the ride to rest up.
After a VERY long day on Saturday dealing with the Toastmasters District 29 contest (more about that in another post), I took off on Sunday morning, for the 7-hour drive to Spartanburg, South Carolina. Not 50 miles into the drive, my GPS went belly-up. I spied a Wal-Mart just off the highway, exited, bought, installed, and took back off in less than 15 minutes. Not a bad episode of problem solving.

Finally got down to Spartanburg to pick up my race packet and get settled in….and was greeted by what must be the only location on earth where they have TWO Krispy-Kreme stores right across the street from each other. I think that’s where Starbucks got the idea. Checked in at the hotel, went next door to get a big pasta meal, then came back to get ready for the next day 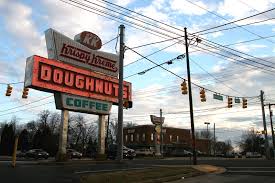 While I didn’t sleep much, I at least got some rest, before waking up at 5AM. Suited up, put the bike on the car, and drove to the start line. Made some small talk with other riders, and at 6:30 AM….we took off.  The first few miles were pretty fast – lots of bike traffic, close passes and large pelotons, and I made good time, averaging about 18-20 mph for the first segment. First rest stop was at 22 miles, so a quick bathroom break, some quick food, and back in the saddle.

The next rest stop @ 44 miles was another quick off and on…then our first big climb @ Bill’s Hill. It’s only a mile long, but the first section was a double-digit climb. Got to the top, and a FAST descent down the other side. I’m actually having fun with this! Stops at 65 and finally at 73 miles…no big deal. I felt great.
After a 10-minute break at Tom Johnson Campground, I got back on, and started up highway 80 toward the Blue Ridge Parkway. First part was pretty easy….with nice views of a stream and lake on the way. Once we got to 80 miles….the grade started getting steeper…and at mile 85, I started getting some minor cramping in my quads. Not a good sign. I was able to limp along towards the BRP rest stop, which was where I quit in 2008. Back then, I was wiped out – it was close to 100 degrees, I was dehydrated, and ran out of time. This time…I was a bit dicey….but I wasn’t going to stop in the same place.

I was about an hour ahead of the ride cut-off, so I worked out the kinks in my legs and got back on the bike. The first part of the BRP was pretty cool. Fairly level, and got to ride through two tunnels.  Views off to the side were spectacular. Once I got past the short downhill section, and started climbing again…..my legs started cramping so badly I had to get off the bike before I fell. I tried to get back on….but they’d seize up again. I decided to try and walk the bike for a bit so I could get my legs back.
At the 90-mile marker, I was off the bike more than I was on. Whenever the grade would flatten out, I’d get back on, pedal for as long as I could…then I’d have to get off when the cramps returned. I still had 12 miles to go, all uphill. I was starting to worry that I’d run out of time. At each rest stop, I’d do some major stretching, and get back on.
At the 97-mile rest stop, one of the volunteers was giving some VERY vocal encouragement to riders as they left the lot. As they rolled out, he’d yell “PUSH IT!” By that point, I was hurting so badly, I had to ask him not to say anything when I rolled out. He saw how much pain I was in…and was able to give me some encouragement to get going again. That helped…because I was nearly in tears from the cramps and stress of trying to keep going.

At the 100 mile rest stop…….I still had an hour to go….so I thought that even if I had to walk all the way, I could still make it. Prior to that, the SAG drivers would check in on me frequently…asking if I needed any help, or if I wanted to quit. I REALLY didn’t want to drop out AGAIN. I asked how many riders were behind me, and the first time they said 7. I felt OK about that. Later, it became 5…then 2…..and at 100 miles, they told me I was the LAST rider on the course.  That meant that everybody was waiting on me to finish, or quit. I soldiered on, with the green SAG van following me like the Grim Reaper.
I got to 102 miles…..with only 1/2 mile to go, so I started to think I was going to beat the deadline….when I turned my foot the wrong way — and both of my calf muscles SIEZED up, and I fell. I already had one foot down, so it wasn’t far, but every time I tried to move, it felt like someone was sticking a knife in the back of both of my legs. At that point, I WAS in tears.  A park ranger came around the corner…..and because I was partially in the road, he thought I’d been hit by a car. Fortunately….I wasn’t injured…just tied up in knots. He helped me stretch the calf muscles out….and once again….I was able to get back on the bike. I struggled up the last hill, and it leveled off to a parking area……as I turned the corner, the volunteers at the finish line started CHEERING! The clock said 11:50:32…and I (barely) beat the final cut-off by 10 minutes.

For most of the finishers, they got some hot soup, food, and were able to change their clothes. With me, it was…grab the bike, hand me my finisher’s patch, shove my dry clothes bag in my arms and march on to the bus. Sort of a hasty end to a long day….but no matter how badly I felt, no matter how long it took…I finished as the LAST official rider to complete the 2014 Assault on Mt. Mitchell.
Of the 820 riders who started, 611 finished before me – I was #612. So, despite it being a ‘last place’ finish….I think of it as a badge of honor. No matter how bad I felt, no matter how dark my mood…..I just kept going. It would have been easier, and much less painful to get in the truck and ride home….but I had set out to finish, and that’s exactly what I did. So….even though I finished last…..in reality….I won.