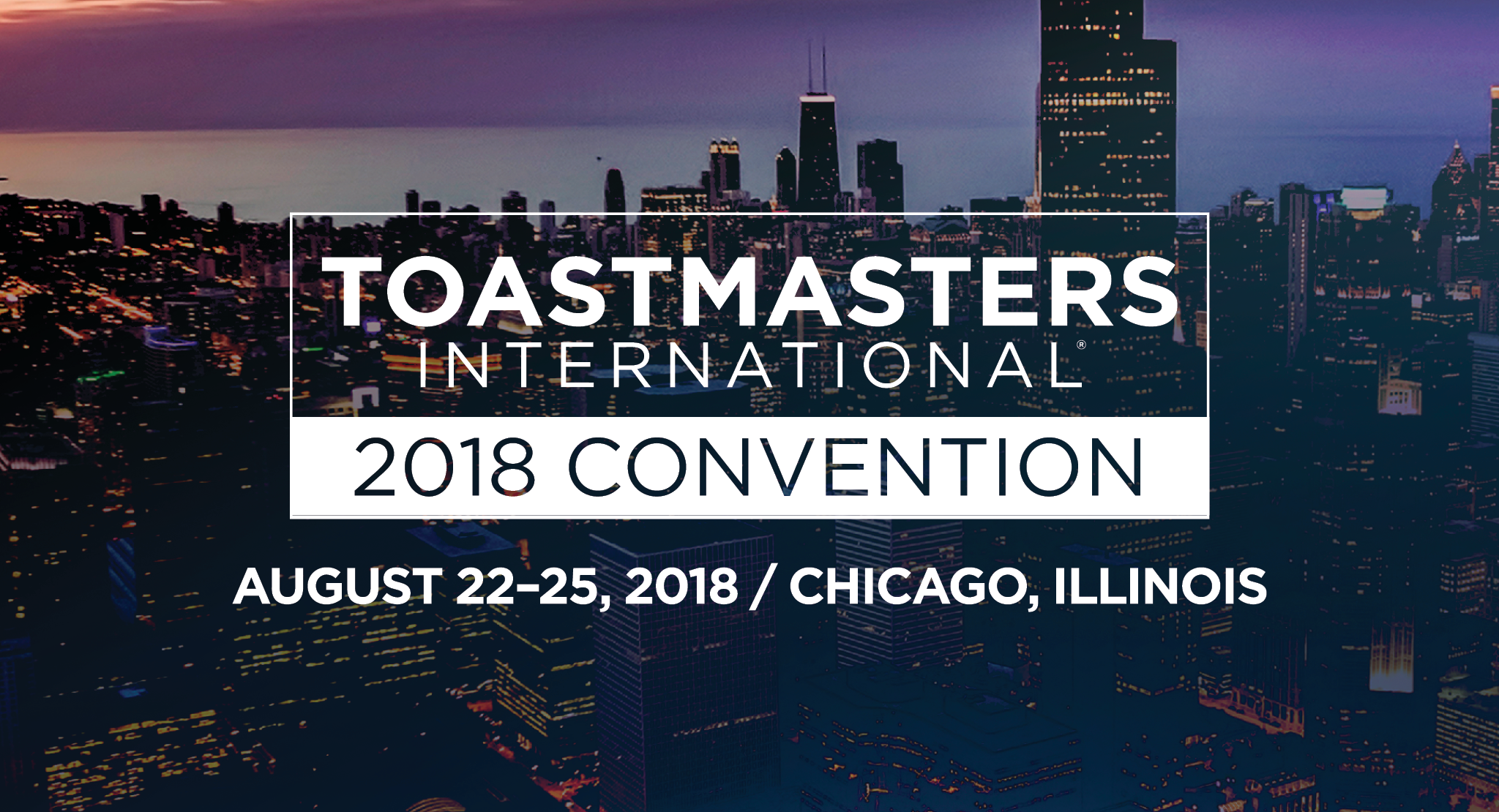 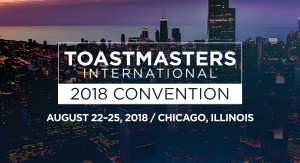 It was quite an experience, meeting Toastmasters from all over the globe – some were already friends on Facebook, but it was good to meet people face to face. Some were beginning speakers, and some were World Champions, but everyone I met was generous with their time.

I arrived a day early, and settled in to the briefings for my contest round, relaxed, got familiar with the surroundings, and met the other contestants in my round. That evening, I went to the contest room to get familiar with the stage and make sure I knew how it would feel during the actual contest. I’ve been in speech contests each of my five years in Toastmasters, but this was the first time where the stakes were a lot higher. In earlier contests, if I lost, not too many people knew about it, and I could just drive home. Here…my District had a large group of attendees to cheer me on, as well as all of my friends on Facebook.

To add a little more pressure, my mother and my two sisters were attending – Mom knew I wrote the speech about her story, but this would be the first time she heard it. She, my sisters, and my coach, David Goad were all in the front row. There were over 200 people in the audience, and a lot more watching the contest via streaming around the globe. Yeah, there was a little pressure.

The actual contest was pretty straight forward – it was a lot more formal, because we all had to sit in the front row before and after our turn – usually, I hide out during contests when I’m not actually on stage. I like to hear the other speakers…but I usually decline to, just so I don’t get distracted. This time, it wasn’t a choice. It was good to compare different speaker styles and messages, but again, a bit distracting for me. Some contestants stayed in their zone by listening to music while they sat in the front.

When my turn came, it felt good. I was relaxed on stage, and while I didn’t get as much audience reaction with the speech as I usually do, I hit all my marks, and was able to acknowledge my mother directly during the speech. It only took about 5 seconds, but it seemed to resonate with the audience, and I felt it was important to do. As 1995 World Champion Mark Brown says, “Your life tells a story…and someone out there needs to hear it.” Mom needed to hear her story.

I didn’t notice any timing lights other than the green, but since I had never ran more than 6:30 in any run-through of this version, I felt I was OK. I sat down, and watched the rest of the contestants. When it came time for the results, the contest master announce there had been a disqualification for time. I thought it was one of the later speeches, since it felt kind of long, but didn’t think any more of it, even when they announced the results.

Despite working on the speech starting last October, and dozens of post-District rehearsals, I didn’t place in the top three. I felt it was the best performance I had given…and it felt sincere, so I chalked it up to experience. I got the opportunity to speak at that level….and that was good enough. After the contest, however, someone asked me – “Did you talk with the guys who watched it online?” “No, why?” “They said you went over time.”

I couldn’t believe it. I must have missed the red light, and in five years of competing, I had NEVER gone over time, not even in Table Topics. After watching the recording, however, I went over…..by five seconds. Even though I added a a couple lines to directly thank Mom in the speech, it only added…..five seconds. That’s what put me over. Almost a year of preparation, practice and effort……and I went over time.

Was I mad? You bet I was…..at first. I was mad at myself for not paying attention to the timing lights more closely. I was upset that I was the one who took away my chance to move forward in the competition. I was embarrassed at disappointing all the people in my District and my coach who also put in a lot of effort supporting me to this level.

But then, I thought a bit more about it. Even if I came in on time, that was no guarantee that I would have won. There were 11 good speakers in my round, each one bringing their own unique perspective and delivery to the stage. Every one of them deserved to be there, and every one of them worked hard to get there. Even though there is one eventual winner in the contest, it doesn’t mean that there are 29,999 losers. Every story deserves to be told….and needs to be told. If I went over by five seconds by taking the time to personally acknowledge Mom…..I’m still glad I did. There will be other contests, other opportunities to speak and reach an audience. This was my opportunity to tell Mom’s story….and if I had to do it over again I’d……

….pay more attention to the timing lights and pacing and make darn sure I finish before running out of time.

Are you telling the stories you need to tell? There’s still time.