Fifteen years ago, September 11, 2001. I was working around the corner from the White House, sitting in a facilities meeting, talking about disaster recovery. Someone stuck their head in the door and said a plane had hit the World Trade Center. Having flown in and out of Laguardia many times, I figured that someone in a small plane had crashed into it after a medical emergency, since that sort of thing had happened before. 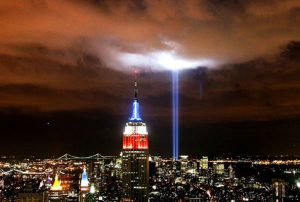 Just a few minutes later, we got the news about the second plane, so we all moved into the lobby, and saw the coverage unfolding on CNN. Even today, it seems surreal. It was something that I couldn’t believe was happening right before my eyes.

Even though we were watching things live on TV, and getting updates over the radio and Internet, it was hard to tell what was true, and what wasn’t. We got the news of the third plane hitting the Pentagon, just a few miles away, and there were reports that the White House or Capitol building was a target.

Reactions in the office ran the gamut. Some were openly upset, some were on the verge of panic. Others tried to distract themselves by focusing on ‘what if’ scenarios, and still others tried going back to work. Some people started trying to leave to get home to their families, and a vice-president threatened to charge them vacation time if the left early. None of it seemed to make any difference. I remember trying to get through the phones to tell my parents and my family that I was OK, and we were all safe in our office. Phones were pretty much jammed, so I sent e-mail updates and hoped they got there.

Later in the day, things had calmed down enough in the office that I decided to drive home. As I drove over the Potomac River, I could see the smoke still rising from the Pentagon. Once I got home, I collected the kids and sat glued to the television for the entire day. Living right next to Dulles airport, we’re used to a lot of aircraft noise….but over the next several days, it was eerily quiet. The only planes we heard were F-16’s screaming overhead.

Fortunately, we were all safe. Over time, I learned about all the people who were lost, those who lost others, and the people who made tremendous sacrifices to help others. Despite the tragic nature of the day, what I’m left with, fifteen years later is hope. When things go bad, there are people who rise to the challenge, who do what’s necessary to help those around them. From the firefighters who rushed into the towers, to the police, rescue workers and civilians, there were many who did what they could, knowing the risk, because it was the right thing.

I recently watched ‘The Finest Hours’, about a daring rescue from a tanker that split in two during a nor’easter. Despite the dangerous seas, freezing temperatures and losing a compass, a young Coast Guard crewman and three crew save 32 sailors from what would have been a certain death. Despite being awarded the Gold Lifesaving Medal, Bernie Webber credited his crew for the rescue. They knew it was dangerous, but they went ahead, because it was the right thing.

Just this weekend, I watched the movie ‘Sully’, about the amazing water landing of US Air 1549, which recounts the ‘Miracle on the Hudson’. Pilot Chesley ‘Sully’ Sullenberger and First Officer Jeff Skiles take what seemed to be an impossible situation, and save the lives of all 155 people on board. No matter how many people called Sully a hero, he kept thinking about how many things could have gone wrong. Even so, he kept focused on what he COULD do….and kept doing it, until everyone was safe and accounted for, because it was the right thing.

When I hear about these stories, I always wonder – if I were in that situation, how would I react? Would I be able to keep a clear mind and do the right thing? I hope I never have to answer that question. If I am faced with a situation like that, I want to just focus on what I can do. Keep making the best choice I can, and doing the right thing.